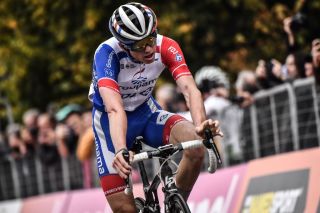 Groupama-FDJ climber David Gaudu has told French newspaper L'Equipe more about his ongoing experience as the floor of his and his teammates' hotel in Abu Dhabi, in the United Arab Emirates, remains in lockdown since the UAE Tour was cancelled with two stages remaining on Thursday over fears that members of the race entourage had contracted the coronavirus.

Gaudu told L'Equipe on Monday: "On Friday, we were still allowed to go wherever we wanted in the hotel – to the gym, or the swimming pool, and to be in contact with the other hotel guests.

"That evening, we got the results of our tests, and we were all negative. But on Sunday morning, at 7am, government security staff decided to block off our entire floor, and we weren't allowed out of our rooms, while others were allowed to leave. We still don't know why," he said.

A post on Twitter by his Groupama-FDJ team on Monday evening seemed to shed a little more light on the squad's extended stay in the United Arab Emirates.

"Our riders and staff in the UAE are still confined to their hotel rooms. Despite a first battery of testing results that was negative, we are still waiting for the outcome of a second battery of medical tests carried out on Sunday," it read.

"Five out of 12 tests have already been notified to the team, and all are negative. We are waiting for the remaining seven, which are currently being analysed."

According to L'Equipe, Gaudu's teammates Miles Scotson, Jacopo Guarnieri and Bruno Armirail all tested negative in the first round of tests, and have been allowed to return home, while Gaudu, 2016 Milan-San Remo champion Arnaud Démare, Ignatas Konovalovas, Ramon Sinkeldam and eight members of staff have had to have further tests.

While the other teams that participated in the UAE Tour have now been able to leave, riders and staff from Groupama-FDJ's fellow French WorldTour team Cofidis and Russian ProTeam Gazprom-RusVelo are also being made to stay longer at the Crowne Plaza Abu Dhabi Yas Island hotel, while WorldTour outfit UAE Team Emirates has chosen to remain there, explaining in a statement on Sunday: "Despite being given the green light to travel home, and the last tests carried out coming back negative, our team has decided to extend their stay in the UAE to continue testing everyone's conditions and go home only with the safety of non-contagion."

On Monday, the riders apparently had some weights brought to their rooms, so that they could at least do some strength training while they waited, as well as some board games to help to pass the time.

"It's been pretty crazy, but we've got everything we need: shampoo, shower gel, towels, rubbish bins," explained Gaudu. "Food is left for us outside our hotel-room doors in plastic bags, while the corridors are like giant rubbish bins.

"One aspect of it all is quite funny, though: the people here at the hotel are afraid of us. When we get our food brought to the room, we open the door, but within five seconds the people bringing it have already run off down the corridor again so that they don't have any contact with us," he said.