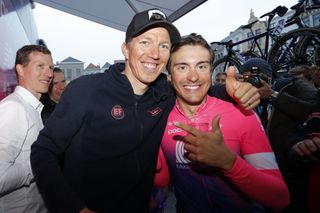 EF Pro Cycling will line up in Antwerp for the Tour of Flanders with both the defending champion, Alberto Bettiol, and two-time podium finisher Sep Vanmarcke in their ranks. Despite that, the US team's two riders don't feature among the top favourites for Sunday's Ronde – although Bettiol believes they have a stronger team than last year.

While Wout van Aert (Jumbo-Visma), Mathieu van der Poel (Alpecin-Fenix) and road race world champion Julian Alaphilippe (Elegant-QuickStep) feature at the top of the list of favourites for this year's Flanders, Bettiol and Vanmarcke appeared in an EF Pro Cycling video press conference on Friday to talk about their own chances.

Bettiol will start with the number 1 dossard on his back, but last year's winner played down his own chances of victory.

"It's been a strange year, obviously, and I showed last year that I was the strongest, and maybe I won't be this year," the Italian admitted. "There are people stronger than me, and I don't consider myself the big favourite, but as a team we'll try to win this race again. I think we are even stronger than last year as a team."

Alberto Bettiol: I won Flanders because of this team

10 riders to watch at the men's Tour of Flanders

As evidence of that, Bettiol pointed out that the Flanders squad had been together for the past week, racing together at last weekend's Gent-Wevelgem – other than Stefan Bissegger – in readiness for this weekend.

"We've got good morale, and on Sunday we'll try to do a great race. We have to be intelligent to play our cards – use our riders – in the right way at the race. We know how to win this race, and, personally, having won before, I don't have that stress on me to try to win again," Bettiol said.

Seated next to the 26-year-old, the older Vanmarcke would dearly love to win the Ronde. The Belgian took third place behind Fabian Cancellara and Greg Van Avermaet in 2014, and then third again behind Peter Sagan and Cancellara in 2016.

Vanmarcke's shortened season – just eight race days of racing since the resumption of the cycling calendar following the shutdown due to the coronavirus – could well count against him, as the 32-year-old admitted.

"I've done everything I can in training," he said. "It's true that I haven't done a lot of racing, and I wish I'd done more, but I've done a lot of hard training to try to compensate.

"The big question is whether it's been enough racing to really be able to go beyond my limits, and at Gent-Wevelgem I didn't really feel as though I did have that," said Vanmarcke, who finished 17th, while Bettiol took fourth.

"On Wednesday I trained really hard again, but I don't know whether I've done enough racing in the end to be at my very best, so we'll see on Sunday," he said. "It's been a special year, and I wish I could have done more racing, but I had to try to make the best of it and try to do my best with training."

Rather than Vanmarcke, it's Van Aert and Van der Poel – and their war of words after Gent-Wevelgem after marking each other out of contention – that everyone's talking about.

"Last Sunday was the first time that some feelings had come out [between them]," Vanmarcke said. "If they want to win at Flanders, they'll have to race against each other, but also somehow race together.

"But there's not only them; there are a lot of good riders who also have the goal of winning the Tour of Flanders, and it's not only going to be about the game between Van Aert and Van der Poel," he said.

"Mads Pedersen [Trek-Segafredo] is pretty fast," Bettol pointed out, with the 2019 road race world champion having won last weekend's Gent-Wevelgem and having finished second at the 2018 Tour of Flanders. "And even though it's Alaphilippe's first time at the Ronde, he is probably in the best team, and they know the roads better than anybody else, and they will tell him how to race perfectly. Those are the facts, and when we have our pre-race meeting, we'll consider this."

While Alaphilippe is on everyone's lips as a possible winner, another Frenchman – Romain Bardet – will also, like Alaphilippe, make his debut in Flanders on Sunday, and Bettiol was asked whether he thought that the AG2R rider could be a threat.

"These guys, normally, when they're strong, they're strong – whether it's climbing or on the cobbles. I remember last year that Alejandro Valverde [Movistar] was really strong, and in 2018, Vincenzo Nibali almost stayed with [eventual winner] Niki Terpstra when he attacked," he said.

"I remember how Bardet was two years ago at Strade Bianche – he was really strong [finishing second]. It depends on what level he's at now, and whether he's in good shape. If he's as strong as he was at Strade Bianche, for sure he'll influence the race and play a role," said Bettiol.