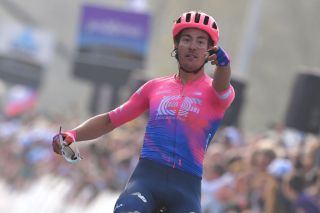 Tour of Flanders winner Alberto Bettiol has extended his contract with EF Pro Cycling and will now stay with the US WorldTour team until the end of 2021.

Bettiol spent much of his early career with Jonathan Vaughters' team, only moving away to join BMC for 2018 before returning the following year. Always considered a talented Classics rider, he confirmed his ability with a solo attack at the Tour of Flanders on the Kwaremont and was never seen again. Incredibly, it was the first victory of his career.

The Italian has since won the time trial at the Etoile de Bessèges and finished fourth at Saturday's Strade Bianche after a generous ride and pursuit of winner Wout Van Aert.

"Alberto has been a wonderful presence on this team for years now and someone we all absolutely love racing and sitting down to dinner with. His class is apparent, from Flanders to his more recent exploits at Strade Bianche. He’s a major part of this outfit, to say the least," team manager Jonathan Vaughters said, confirming Bettiol's contract extension.

Bettiol, who hails from Poggibonsi, not far from the roads of Strade Bianche, is the first major signing for EF Pro Cycling for 2021. Rigoberto Urán, Tejay van Garderen and Classics contender Sep Vanmarcke are out of contract this year. Talented young Colombian Sergio Higuita and Canada's Michael Woods are on board for 2021.


"I’m super happy to stay in this team. It’s like having a second family. It’s the perfect environment for me to grow and it’s really helped give me a lot of confidence since 2018 when I decided to rejoin the team," Bettiol said.

Bettiol sees his ride at Strade Bianche as a springboard to the rest of the rescheduled 2020 season. He first showed his 2019 spring form with an attack on the Poggio at Milan-San Remo. It surprised many, including an Italian television commentator who thought he was Simon Clarke. Bettiol responded to the lack of recognition as he crossed the Tour of Flanders finish line by taking off his sunglasses and pointing to his eyes.

Bettiol will be part of the EF Pro Cycling team for Saturday's Milan-San Remo and then target the October Classics after riding the Tour de France.

"I was happy with my performance on Saturday at Strade Bianche. It proved to me that I’m still at a good level. For me, this is the best environment to keep on working in and keep on improving and getting results, and to further show my capability of being not only a leader but also a great helper for the team," Bettiol said.

"I would love to be the same rider as last year, at the same level and more. I’m working to take a step forward because I still have a lot of goals to achieve for the team and for myself of course, and as a teammate to help big riders. I’m really looking forward to starting my next race this coming weekend at Milan–San Remo but also, most importantly, to be staying with a team that has really believed in me since the beginning."