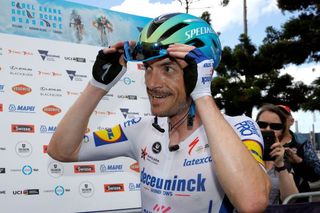 The winner of the Cadel Evans Great Ocean Road Race earlier this month, Dries Devenyns, will line up alongside Deceuninck-QuickStep teammates that include Kasper Asgreen and Rémi Cavagna at French stage race the Tour de la Provence this week.

It will be the first race of the season for Asgreen, who begins his build-up to the spring Classics, where last year the young Dane came of age to take second place to EF's Alberto Bettiol at the Tour of Flanders, while US time trial champion Ian Garrison makes his debut with his new team after joining from US-based outfit Hagens Berman Axeon this year.

Cavagna got his season under way at last week's Volta a la Comunitat Valenciana in Spain, and the Frenchman will be full of confidence for the 2020 season after winning a stage at the Vuelta a España towards the end of last season, while Iljo Keisse is the man most likely to have the team's full backing for the opening stage from Châteaurenard to Les Saintes-Maries-de-la-Mer on Thursday, which should end in a bunch sprint.

Andrea Bagioli is, like Garrison, another new signing making his debut, and should be one to watch after winning last year's Ronde d'Isard stage race – a proven testing ground for young talent – and emerging victorious at the under-23 version of Il Lombardia. The team's completed by Pieter Serry, fresh from the Vuelta a San Juan in Argentina, where the experienced Belgian helped young teammate Remco Evenepoel to the overall victory.

Whether Deceuninck-QuickStep has anyone capable of competing for the overall title at an upcoming race that includes Mont Ventoux remains to be seen. Favourites for the GC include Arkéa-Samsic pair Warren Barguil and Nairo Quintana, while Team Ineos field Pavel Sivakov, Sunweb have Wilco Kelderman, and Astana bring back last year's overall winner, Gorka Izagirre.

However, all seven of Deceunink-QuickStep's riders certainly have the ability to take stage wins, and sports director Geert Van Bondt says that they're entering the race "with a high degree of confidence".

"One thing's for sure, it's not going to be an easy race," said Van Bondt on the team's website. "We need to be careful on stage 1, where the race could be fragmented by the winds, before entering the rugged terrain that will lead to some big gaps.

"Our squad blends youth with experience, and we're very eager to see our new guys Andrea and Ian at work, to see how they slot into the team and how they react on this first race with 'The Wolfpack'. Kasper also starts his season here, while Rémi, Dries, Iljo, and Pieter have already raced this year and showed good condition, so we're going with a high degree of confidence to Provence," he said.

The climbing starts in earnest on stage 2 between Aubagne and La Ciotat, and then ramps up another level the next day on stage 3, which starts in Istres and finishes at Chalet Reynard on Mont Ventoux – six kilometres shy of the summit, but nevertheless a serious test for many riders so early on in the season.

The four-day race then concludes with a hilly final stage from Avignon to Aix-en-Provence, which should provide the sprinters with another opportunity, but will still be hard-fought among the overall contenders if the time differences are still small after the Ventoux stage.