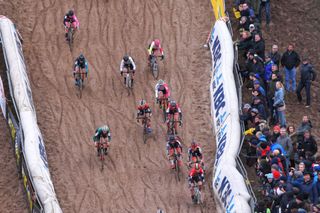 In another busy weekend of cyclo-cross racing in Belgium, Toon Aerts (Telenet Baloise Lions) and Ceylin del Carmen Alvarado (Corendon-Circus) both managed to extend their overall leads – albeit by slim margins – in the Superprestige series after round 5 in Zonhoven on Sunday, while Marianne Vos (CCC-Liv) made a return to winning ways at the Ethias Cross in Essen on Saturday.

Hermans back on top in Essen

Alvarado could only manage second place on the day in Zonhoven, having been out-sprinted for victory by 777's Annemarie Worst, but it meant that Alvarado extended what had been a three-point lead over Worst's teammate Yara Kastelijn to four points, while world champion Sanne Cant (IKO-Crelan) stays in third, another 10 points down, after having finished sixth on Sunday.

Aerts won the elite men's race from Pauwels Sauzen-Bingoal pair Laurens Sweeck and Eli Iserbyt, with Sweeck having been unlucky to crash on the final lap while challenging Belgian champion Aerts for the win.

It means that Aerts has now opened up a slim one-point lead over Sweeck after both riders had started the day on the same points at the top of the standings. Aerts' Telenet Baloise Lions teammate Quinten Hermans is another four points further back in third place.

Saturday's Ethias Cross in Essen attracted plenty of big names, although a number were also resting ahead of Sunday's Superprestige round, while the sport's biggest star – Mathieu van der Poel – wasn't in action at all across the weekend, opting instead to take part in a Corendon-Circus team training camp in Spain.

The returning Marianne Vos easily outpaced Hungarian champion Blanka Kata Vas (Doltcini-NM Transport) and British rider Anna Kay (Experza Pro CX) for victory in the women's race in Essen, while Deceuninck-QuickStep's Zdenek Stybar also made a solid return to the world of cyclo-cross with 12th place in the men's event, which was won by Quinten Hermans.

Stybar went on to take 19th at the Superprestige in Zonhoven the next day, but had admitted to Het Laatste Nieuws ahead of the weekend's racing that he still had a bit of work to do before he thought he could be truly competitive.

"My condition is far from good," he said. "On the other hand, I did start training a little earlier for it than in other years, but that wasn't really training specifically for the intensity of 'cross."

Stybar is set to next be in 'cross action at the Waaslandcross in Sint-Niklaas, Belgium, on December 21, ahead of his first World Cup of the 2019/20 season at Heusden-Zolder on December 26.