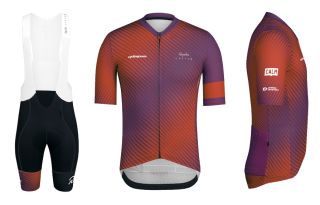 On Monday the 24th of July, we announced a competition in collaboration with Rapha. Readers were invited to use Rapha Custom to design their own jersey and shorts, from which we'd pick a winner.

Today, we can announce that the winner is Nicola Turrini, with the following design:

Unsurprisingly, here at Cyclingnews we really like the choice of orange and purple colours, but that was far from the primary reason for choosing Nicola's design. We feel that the way the colours have been blended really shows off the capabilities of Rapha's Custom program, and the subtle placement of logos means our chosen charities, CALM and Ambitious About Autism, will be represented even after the auctions are complete. Representatives from both Rapha and Cyclingnews independently put Nicola's design on their respective podiums, and once those podiums had been shared, the winning design became clear.

If you wish to view the designs in more detail, you can do so via the following links:

As we explained in the introduction to this competition, Rapha has a minimum order quantity of five items for designs created with Custom, so the four remaining designs will be auctioned off for charity. Nicola opted to go for the men's jersey and shorts, so all of the auctioned kit will be in men's design, and the auctions will pair jersey and shorts together.

Collective proceeds from the auctions will be split equally and donated to our chosen charity partners, CALM and Ambitions about Autism.

CALM, which stands for Campaign Against Living Miserably, is a London-based charity, registered in England and Wales. It is an award-winning charity dedicated to preventing male suicide, the single biggest killer of men under the age of 45 in the UK.

Ambitious About Autism is another London-based charity registered in England and Wales. Their work supports children and young people with autism, running specialist education services and an award-winning employment programme. They also use their expertise to deliver training and consultancy to a wide range of organisations to improve awareness and understanding of autism.