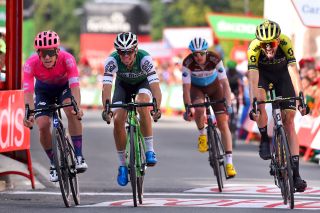 Lawson Craddock (EF Education First) came within sight of taking his first ever professional win on stage 11 of the Vuelta a España, but the 27-year-old fell short at the final fence.

Instead, Euskadi-Murias pro Mikel Iturria, less than a month Craddock's senior, claimed his debut victory as a pro by barely six seconds.

Already fourth in the Pau time trial, Craddock was active in stage 11's 14-rider break of the day, first when it broke apart on the second category Col d'Ispeguy at 65 kilometres from the line, again when it partially reformed closer to the finish, and yet again when a four-rider chase group behind Iturria finally managed to close the gap.

But after the gap shrank to as little as nine seconds in the finale and six by the finish, it just wasn't to be and Craddock had to settle for third.

"There was just hesitation, that's frustrating for sure. I think we had a lot of promising moments and groups to go to the line, but there was just no cooperation in the break, ever, in the last 40km, which was a little disappointing," he told reporters.

"In the end, that's racing. The Murias guy made a great move and played his cards right."

Craddock said that tactically he might have overplayed his hand, given that he was clearly in such top form.

"I thought I had the legs to win, but sometimes, I guess, when you feel too good you show it a bit too much. Everyone starts looking at you. You have to start thinking a lot more than that, using your brain a lot more than your legs.

"Unfortunately, today I just wasn't able to cap it off. It was a great opportunity, and for a rider like me, I don't get a lot of those. It's frustrating, to say the least, just to miss out on the win."

EF Education First have had a brutally difficult first part of the Vuelta, with three abandons caused by a mass crash seeing team leader Rigoberto Uran, as well as Tejay Van Garderen and Hugh Carthy, forced to quit with injuries.

Craddock said after that tough opener the team switched their attention to stage wins, and having Juanma Garate, the EF director who grew up nearby on stage 11, in the team car was a definite advantage when it came to racing through the hilly, twisting roads of the Basque Country and northern Navarre on stage 11.

"This was his big training area when he was a rider, and he knew every hole in every single road. Having him in the ear was great," Craddock said.

As for what he could have done differently and maybe taken the win, the Texan racer said: "definitely it was a great moment when the Murias guy went, and in hindsight, you always think, 'I should have gone with him'.

"But it's hard to in that moment to really commit to that. It was tough racing and there were a few of us more or less marking each other," he said. "I was able to get in that [chase] group in the end but the racing just didn't fall my way."