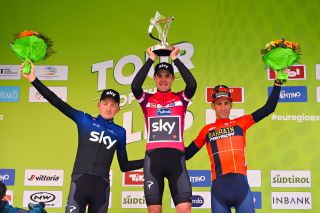 The cancellation of the 2020 Tour de Romandie, scheduled from April 28 to May 3, and the postponement of the Tour of the Alps from its spring date of April 20-24, have extended the loss of major men's and women's professional races due to the effects of the coronavirus into late April and early May.

The Itzulia Basque Country stage race was also postponed on Monday after Spain imposed limits on movement, including cycling, for professional athletes. The race had been due to take place from April 6-11 but the organisation has stated that the it is now postponed "until further notice"

After Paris-Nice ended on Saturday, following France's introduction of stringent limits on movement and social distancing, the UCI said on Sunday that the safety of athletes is a 'priority mission,' with organisers requested to cancel any cycling event on the UCI International Calendar in territories identified at risk by the World Health Organisation.

A large number of race organisers and teams had already acted before the UCI's announcement, effectively putting the cycling season into pause for most of April.

Tirreno-Adriatico, Milan-San Remo, the Volta a Catalunya and the early Belgian Classics have all been cancelled or postponed due to the Covid-19 coronavirus pandemic and the resulting number of government decrees halting public gatherings. The Giro d'Italia has already been postponed from its May date and organisers have admitted that the Tour of Flanders (April 5), Scheldeprijs (April 8), Paris-Roubaix (April 12), the Amstel Gold Race (April 19), Flèche Wallonne (April 22) and Liège-Bastogne-Liège (April 26) are unlikely to go ahead.

The Tour of the Alps is normlly considered a vital step towards the Giro d'Italia, with Vincenzo Nibali (Trek-Segafredo) and Romain Bardet (AG2R La Mondiale) due to ride in the Tyrol–South Tyrol–Trentino Euroregion of northern Italy and Austria. However, the five-day race also accepted that the ongoing uncertainty due to the coronavirus makes it impossible to organise stage races in the short term. Race organiser GS Alto Garda did not immediately throw in the towel and hopes to find a date later in the 2020 season.

“It is very hard for us, as for many other organizers dealing with the same issues but we all are clearly going through a unique and very serious juncture, in which public health and safety must come before and above any other consideration," Giacomo Santini, the President of GS Alto Garda said in a statement.

"Reducing the risk for the populations and returning to normality as soon as possible shall be regarded as priorities over everything else. When, hopefully soon, sports events will be cleared to resume, we will verify with the UCI whether the conditions are there for the event to be held on new dates, according to its technical status and all the needed safety measures."

Julián Eraso, president of the organising committee of Itzulia Basque Country, said that the event had initially presented plans for “an anti-coronavirus health protocol” to authorities, including closed starts and finishes, disinfectant mats and temperature controls, but the escalating situation in Spain meant that there was no option but to postpone the race. “Safety and responsibility are above all else,” he said.

In a statement on Monday, the race organisation outlined its hope to hold the event later in the year: “We hope that the UCI announces a new date for 2020, and we can announce that the 2021 edition will be held on April 5-10.”

The organiser of the Tour de Romandie, meanwhile, has opted to cancel the 2020 edition of the Swiss stage race altogether.

"As far as possible, the configuration of the 2020 edition will be resumed in 2021. Contacts in this direction will be made in the coming days with the 2020 stage cities," race organiser Chassot Concept announced.