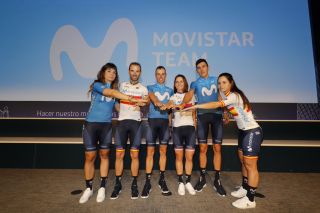 The Movistar team has announced its men's and women's teams will stop all racing activity until March 22 due to the development and implications of the coronavirus Covid-19 across Europe.

Race organisers in Italy have already cancelled Strade Bianche, the GP Industria & Artigianato and the Trofeo Alfredo Binda women's race. To stay up to date with the latest team changes, head to our coronavirus team withdrawal tracker.

"This choice, made after consideration of the advice given by the team doctors, takes into account of the current situation related to COVID-19," Movistar said.

"The Movistar Team, looking to preserve the health of all its members, as well as every person in touch with the sport of cycling, makes a decision which seeks to contribute, to the extent of its possibilities, to returning to a normal situation."

Movistar join a growing list of major teams that have opted not to race in coming weeks. CCC Team, UAE Team Emirates, Team Ineos, Astana and Mitchelton-Scott have all said they will not ride in Italy and Paris-Nice, with a number other teams pulling out of Tirreno-Adriatico and Milan-San Remo. Despite the high number of coronavirus cases in Italy, RCS Sport is fighting to save at least Milan-San Remo, with a decision on Tirreno-Adriatico expected very soon.

Although France now has 423 cases of Covid-19 spread across the country and may soon increase the level of action to fight the spread of the disease. However, on Thursday, race organiser ASO said the race would go ahead.

They have responded to teams withdrawing by adjusting roster sizes to allow teams to field an extra rider. ASO also extended invitations to Circus-Wanty Gobert and B&B Hotels-Vital Concept to help fill the Paris-Nice peloton.

The UCI has said it would study any decision by the teams on a case-by-case basis, to ensure they are not financially penalised, with ranking points of the affected races unlikely to be awarded. The UCI recognize logistical problems, personal choice and the decision of local health authorities as legitimate reasons not to race.

French squad AG2R La Mondiale have altered Romain Bardet's spring calendar and will now send him to Paris-Nice, while Bora-Hansgrohe changed Peter Sagan's programme and he will head to Paris-Nice instead of Tirreno-Adriatico. Other teams are also shuffling their line-ups.