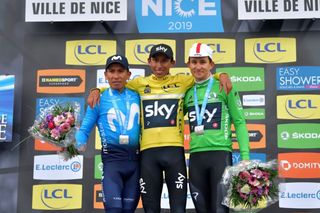 The 2020 edition Paris-Nice looks set to go ahead despite the cancellation of some sporting events in France as part of efforts to curb the spread of the Covid-19 coronavirus.

Representatives from various sporting bodies in France attended a meeting with Minister of Youth and Sport Roxana Maracineanu in Paris on Tuesday morning. It was confirmed afterwards that the French Cross-country Athletics Championships in Montauban have been cancelled but Maracineanu said that, for the time being, Paris-Nice is slated to be held as scheduled.

"It's an international event but the teams are, for the most part, tested," Maracineanu said, according to RMC Sport. "There isn't much of a crowd along the route. A maximum crowd of 3,000 people is expected in Nice, and the event doesn’t pass through risk zones in France."

Maracineanu added, however, that Paris-Nice could be still be affected if local authorities see fit to impose further restrictions on gatherings of people in the coming days.

"The prefects and mayors remain free to apply stricter measures according to the development of the situation in each territory crossed by the race," she said.

Paris-Nice gets underway on Sunday in Plaisir, in the Yvelines department west of Paris, and concludes in Nice on March 15. Egan Bernal won last year's race and is among those slated to participate in 2020.

There have been 191 confirmed cases of Covid-19 in France, with the worst affected region being the Oise department north of Paris, which has reported 64 cases. In response, the French government has placed restrictions on indoor gatherings of more than 5,000 people, while last weekend’s Paris half marathon was cancelled.

On Tuesday, it was announced that matches in the top two divisions of the French football league will also go ahead as planned this coming weekend, though the Ligue 2 game in the Oise between Chambly and Le Mans will be held behind closed doors.

The final two stages of the UAE Tour were cancelled and four teams remain in quarantine in Abu Dhabi following a coronavirus scare on the race, though no cases of Covid-19 have been confirmed.

The race was organised by RCS Sport, who have informed teams that they plan for the forthcoming Strade Bianche, Tirreno-Adriatico and Milan-San Remo to go ahead despite Italy recording the highest number of cases of Covid-19 in Europe.

The two major clusters of the coronavirus in the country exist in the Lombardy region southwest of Milan and in the Veneto region near Padova, with over 1500 people testing positive for the virus.