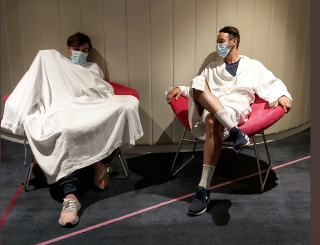 Cofidis and several other teams at the UAE Tour are now mid-way through their fifth day of isolation at their race hotel as they await the results of a second round of medical tests.

The French team were originally tested last Friday at 4am. They received a complete list of negative results on Saturday evening but were forced to undergo a second round of testing on Sunday after a small number of individuals were reported to have come down with fever-type symptoms.

Cofidis, Groupama-FDJ and Gazprom-RusVelo remain in quarantine isolation on the fourth floor, while the UAE Team Emirates squad – who voluntarily stayed behind – are still at the same hotel but on the first floor of a separate wing. All other teams left the race 48 hours ago after being cleared by the local health authorities.

On Tuesday morning, the President of the Cofidis team Thierry Vittu also released a statement that called for his team to be allowed to leave the UAE and once more questioned why they had been kept in isolation.

"They finally cleaned the floor so now it looks again like a real hotel and not like a recycling center. But the atmosphere is so strange," L'Azou told Cyclingnews.

"We are all in our rooms, but nobody locks their doors. Each time we hear someone talking in the corridor we all come to see what's going on.

"Conditions are still complicated. We have some food; they bring us a lunch pack in front of our room but it is so weird. Personally I have lost 3 kilos since Thursday, because of the food and the stress. The morale is not good now. We are very, very united in the team, and that's the only thing that save us from real depression. But for how much longer?"

The team have tried to pass the time by making YouTube videos and using social media as a way of keeping in contact with loved ones and friends back home. The riders have the added pressure of missing a full week of training and racing but their priority right now is to simply get out as quickly as possible.

A lack of information only makes the situation worse. Riders were supposed to be informed of their test results on Monday morning.

"We tried to play down the situation, to laugh with it to make easier our condition here. That's why we made the video with Nathan and Attilio. But we still don't know why we are confined here, and when we can go out.

"This is not good for our mental health to not know when we can reach our homes. Really, we are getting crazy here." L'Azou continued.

"We just had the bad luck to sleep on the wrong floor at the hotel. And now, you are punished for that. What a shame. Riders can't train, at this important time of the season. We don't have enough clothes, enough contact lenses. And still no information. Don't forget us and our incredible situation..."

Held against our will in a place we didn't choose

Vittu expressed similar feelings and called for pressure to be added to help their reliease.

"In fact, I think that this situation is really not normal. We're being held against our will in a place we didn't choose and for an unknown length of time," Vittu said in his statement, published in French and English by the Cofidis team.

"It's this last point which is the most complicated to live with, we always hope that things will get better soon and nothing happens.

"It is true that the means of communication (internet, social networks, telephone, PC) help us to live this situation better, they allow at least to distract ourselves and to reassure our relatives (and incidentally to work).

"It would be nice if the media would take over our situation, just to add pressure where necessary. But hey, morale remains high, this story will end well one day!

"The doorbell just rang at my door, it must be the breakfast left at the foot of the door, that's how they bring us our meals. When we meet someone from the hotel in the corridor, he runs away. That brings me another comparison – we are treated like plague victims; our rooms have not been made since we arrived five days ago, we have to go in front of the elevator, there is a cart and we help ourselves with sheets, soaps, towels.

"That's the situation, some live it well, for others it's more complicated..."