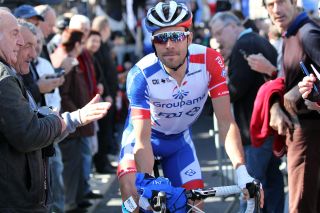 Thibaut Pinot (Groupama-FDJ) has suggested the threat of the Covid-19 coronavirus has been blown out of proportion, arguing there's a disconnect between the media coverage and the reality of the situation.

Pinot was speaking to the media on Saturday on the eve of Paris-Nice, with the interview conducted via video link as part of a series of measures to prevent the spread of the virus at the French race.

Several races in Italy, including Strade Bianche, Tirreno-Adriatico, and Milan-San Remo, have been postponed due to the new coronavirus. With France seeing far fewer cases than Italy, Paris-Nice, which starts on Sunday, is going ahead, but several WorldTour teams have taken it upon themselves to withdraw.

Thibaut Pinot: I need to be patient

"I didn't hesitate to come here," Pinot, whose teammates at the UAE Tour remain quarantined in their hotel in Abu Dhabi, said on Saturday.

"I feel a bit of a disconnect with regards to what's happening on TV. It's true that it's being spoken about a lot but I don't feel any sense of panic around me.

"What happening between TV and the reality on the ground is a bit disproportionate. We'll see tomorrow about the measures taken by ASO. In any case, I never had any fear of coming here due to the virus."

Pinot heads to Paris-Nice on the back of a solid if subdued start to the 2020 campaign, which marked his comeback from his painful late exit from the 2019 Tour de France. He placed 7th at the Tour de la Provence before finishing 6th at the Tour du Var. At both races, he was roundly beaten by a Nairo Quintana, who seems reborn in the colours of Arkéa-Samsic.

"From what I've seen in February, Quintana seems to me to be very much above the rest," Pinot noted. "If he gets through the opening stages without issue, he's the big favourite...by a long way."

As for his own chances, Pinot knows his debut at the so-called 'Race to the Sun' must produce an upturn in form compared to his previous two outings this season. After early opportunities for the sprinters and Classics riders, the first test for the general classification contenders comes on stage 4 with a 15km time trial, and the race will be decided on Saturday with the summit finish at La Colmiane.

"I don't quite know where I'm up to. I'm not going to hide it - I'm not in the condition I thought I'd be. At tee Var, I wasn't great on Mont Faron. I was disappointed with that," Pinot said.

"It's going to be a tough Paris-Nice. It's a good thing for July. I have to get back that race rhythm I'm lacking. On paper, I'm one of the favourites, but we'll se on Sunday in Nice. The objective is to leave Nice with a smile on my face. I must, above all, reassure myself on the final weekend."