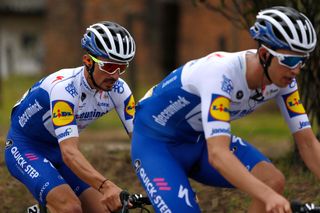 The Deceuninck-QuickStep team have named Julian Alaphilippe, Sam Bennett, Kasper Asgreen and Bob Jungels in their line-up for Paris-Nice, with team manager Patrick Lefevere saying he has faith in the belief of local authorities and race organisers that it is safe to race across France despite the spread of the coronavirus.

Movistar, CCC, UAE Team Emirates, Team Ineos, Astana, Mitchelton-Scott and Jumbo-Visma have all opted not to ride Paris-Nice and will not gather near Paris for Sunday's opening road race stage, but Deceuninck-QuickStep have confirmed they are ready to race. Riders and staff began arriving in France on Friday afternoon.

"While we understand why other teams have chosen not to race, we have decided that we will follow the guidelines set in place by the local authorities and the race organisers, and have faith in their assessment that it is safe for us to race," Lefevere said when they announced their line-up.

"The health of our riders and staff is of course a priority and we will take all the necessary precautions to protect them, while still honouring our commitment to an important race."

Alaphilippe is a former winner of both the points and best young rider jerseys at Paris-Nice but has been struggling to rediscover his brilliant form on 2019 so far this season. He quit the Vuelta a San Juan, ride the Colombia 2.1 race but was off the pace last weekend at the Faun-Ardèche Classic and the Royal Bernard Drome Classic in the south of France.

Like other teams, Deceuninck-QuickStep has selected several riders who were due to Strade Bianche and Tirreno-Adriatico, creating a super team for Paris-Nice. Only Remco Evenepoel is absent from the big-name line-up. He is currently training in Calpe and it is expected that his next race will be the Volta a Catalunya in Spain, if it goes ahead.

Alaphilippe has made a Paris-Nice a target in 2020 and he will undoubtedly look to shine in the 15km time trial in his native Saint-Amand-Montrond in central France on stage 4.

Deceuninck-QuickStep have other options in sprinter Sam Bennett, Kuurne-Brussel-Kuurne victor Kasper Asgreen, Bob Jungels and Zdenek Stybar. Bennett can count on the lead-out skills of Michael Mørkøv, with Tim Declercq and Yves Lampaert also on hand.

"Paris-Nice is one of the most prestigious stage races of the calendar and we are heading there determined to get some good results and add to the 15 stages won at the past editions," directeur sportif Tom Steels said.

"We have two leaders, Julian and Sam, who will both find stages that suit them and will be supported by a strong team comprising riders who have shown a good form recently and can control the race, but at the same time, seize the opportunity if it arises.

"The main goal is to win stages, but we could take an aim also at the general classification, depending on how things will go day by day. Not just the terrain will be important, but also the weather, as there’s a big chance of having some echelons on the first three stages, so we’ll have to remain alert and at all times focused."