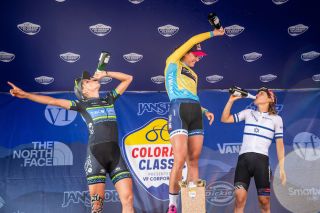 Organisers of the 2020 Colorado Classic announced Monday the cities that will host this year's edition of the race set to take place from August 27 to 30. The four-day women's race will travel to Snowmass Village, Avon, Boulder and Denver.

"We are thrilled to have such a strong line-up of communities for the 2020 event. Each market offers a notable connection to pro cycling, an ideal landscape for competitive racing and a strong commitment to bringing unique and engaging events to their community," said Lucy Diaz, CEO of RPM Events Group, LLC.

"Each partner also aligns with our mission to advance women in sports and we are excited to work together to build out programming around each race stage that celebrates the athletes and engages the community."

Although the specific route details have not been announced, the 2020 edition of the Colorado Classic will begin on August 27 in Snowmass Village, approximately 200 miles west of Denver. Last year's opening stage was held in Steamboat Springs, but organisers have said that the peloton can expect this edition of stage 1's course to be dynamic with screaming descents, punchy hills and some challenging larger climbs.

Stage 2 will take place on August 28 in Avon, which was also the location for stage 2 last year. Organisers have said that this year's stage will be a hybrid similar to 2019's: part fast and flat criterium and part mountain stage with grades up to 14%, with a final descent and run for the finish line in Avon.

Stage 3 will be on August 29 in Boulder, a change from last year's race that was held in Golden. Boulder, a hotbed for cycling, hasn't hosted a stage of a pro race since 2014. Organisers say they have designed a route with something for every type of racer. The course will feature 14.5km of rolling gravel roads, one steep climb and a potential for a sprint finish.

The Colorado Classic will conclude on August 30 in Denver, which has hosted the finale for the past three years. The peloton will compete on a short circuit race with a sprinter-friendly finish in Denver.

The full routes will be released in the coming months, including key details for riders and spectators about start/finish locations, mileage, circuit laps, elevation changes, sprints and Queen of the Mountain (QOM) climbs, according to a press release.

The Colorado Classic will once again offer free start-to-finish TV streaming coverage to showcase the world-class racing and its surroundings.

Last year, Chloe Dygert won all four stages of the Colorado Classic and the overall title.