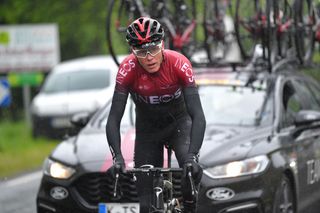 Chris Froome’s long-term recovery from injury will not be affected by his latest round of surgery, Team Ineos have confirmed.

On Saturday Froome posted news on Twitter of an accident at his home that left him with a severely cut left thumb after he sliced it open with a kitchen knife. He was immediately taken to hospital in Monaco where surgeons repaired a damaged tendon. The resulting surgery will leave Froome with a heavily strapped thumb for the immediate few days, while the rider is given time to recover.

“Stupidly cut my thumb with a kitchen knife and had to have surgery to put the tendon back together last night. Stuck giving a thumbs up for a couple of weeks," Froome posted on Twitter.

According to Team Ineos the accident will not alter Froome’s long-term recovery from the serious injuries he sustained in a crash during this year’s Criterium du Dauphine. The British rider crashed while training on the individual team time trial course in Roanne ahead of stage 4 and was later airlifted to hospital. He was diagnosed with several fractures including a broken femur as well as fractures to his hip, elbow, sternum, and vertebrae.

Chris Froome releasing video about his crash and recovery

He underwent lengthy surgery and missed the Tour de France as a result. He is still limited to training on the rollers and despite a short effort on a track in France he has not trained properly on the roads since his accident. The knife-related setback will not alter his training plans according to a Team Ineos spokesperson who told Cyclingnews that "he will be on the turbo training as per his rehab plan."

In late August Froome and Team Ineos released a video in which the four-time Tour de France winner stated that he was ahead of schedule in relation to his 2020 comeback.

“I think it’s safe to say I’m ahead of all the predictions that were made initially of how long it would take even just to get to this point. I got the green light to start weight-bearing - very lightly, but it’s something, it’s a big step,” Froome said.

“I’ve been doing 3-4 hours of physio every morning. I take a small break at lunchtime and then I start the exercises I need to do, 2 hours on my own, just implementing everything that the physio has helped me to be able to do. The days are full.

Froome’s long-term goal is to arrive at the Tour de France in 2020 in the best possible shape. He has not won the race since 2017 but has his sights set on winning a record-equaling fifth title. This year Team Ineos finished one-two in the Tour de France with Egan Bernal beating the 2018 winner and teammate, Geraint Thomas.