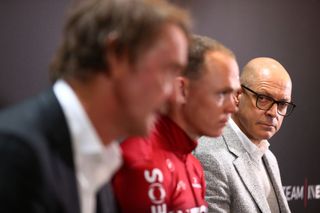 Speculation is mounting over Chris Froome's future, with the usually well-informed Tuttobici website suggesting the new WorldTour squad Israel Start-Up Nation is ready to offer the Briton a three-year contract.

The start date on the contract is said to be August 1, before this year's Tour de France and during the UCI transfer window, but Cyclingnews understands that Froome has not yet signed any agreement yet for 2021 and that his future remains 'up in the air’, according to one source close to the Ineos rider.

Cyclingnews revealed in mid-May that Froome was approached over a possible mid-season transfer as he looked to guarantee Tour de France leadership. A decision on his future is expected in the week.

Froome is currently training in France with a small number of his Ineos teammates as they step up preparations ahead of the resumption of racing.

Where next for Chris Froome?

Any mid-season move would require the consent of Team Ineos manager Dave Brailsford, and whether he would be willing to let Froome leave ahead of the Tour France and thus become a major rival is unclear. However, Brailsford does have history in allowing riders leave without financial compensation, having let Mark Cavendish leave one year into a three-year contract back in 2013.

Froome is out of contract this season and has naturally attracted interest from a number of teams including Israel Start-Up Nation. He also discussed his future with Rod Ellingworth at Bahrain McLaren but Cyclingnews understands that Israel Start-Up Nation are leading the chase for Froome’s signature, while interest remains from CCC Team who are currently looking for a new title sponsor for 2021. Team Ineos are also currently negotiating with Froome but have not yet offered fresh terms.

Froome's contract situation is extremely delicate as the transfer market for Grand Tour team leaders begins to move after the impact of the COVID-19 pandemic on the sport. Froome is just one – albeit large – piece on the board, with the Simon and Adam Yates also out of contract at the end of the season.

The unstable situation at Mitchelton-Scott has prompted speculation over the future of the brothers. Simon Yates was offered a contract at Trek-Segafredo two years ago before eventually deciding to stay put but the American team would have room for the British climber if they decided not to extend Richie Porte’s current terms.

If Froome does move to Israel Start-Up Nation, it’s highly likely that the team will sign further reinforcements to help bolster their GC capabilities in the years ahead. For example, Froome was interested in having Mitchelton-Scott's Mikel Nieve as a key teammate. The Spaniard is also out of contract and was recently voted the best domestique in the world by Cyclingnews readers. Ion and Gorka Izagirre have also been linked with moves from Astana to Israel Start-Up Nation due to their skills as trusted stage racers.

35-year-old Froome has made no secret of his desire to keep on racing for the next few years. The four-time Tour de France winner has also declared his mission to win a fifth and record equaling Tour. However, the situation has been complicated by a number of overlapping issues. Firstly, Team Ineos are stacked with Tour winners, with Froome vying for leadership alongside 2018 winner Geraint Thomas and 2019 winner Egan Bernal.

The Colombian has already stated that he will not sacrifice his 2020 chances for a teammate, even though Team Ineos are currently planning on running with three leaders at the Tour.

Froome has also not raced a Grand Tour since finishing third in the 2018 Tour de France. He suffered a career-threatening crash in the Critérium du Dauphiné last year and although he has returned to full health, he is still racing into the unknown as he prepares to test his body over three weeks for the first time in two years.