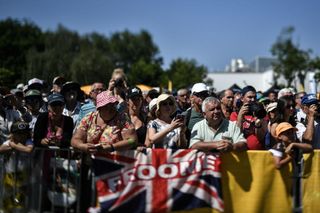 Chris Froome (Team Ineos) has expressed concern that the Amaury Sport Organisation (ASO) will not be able to control crowds or stop spectators from gathering to watch the Tour de France that has been rescheduled for August 29-Septemeber 20 due to the coronavirus pandemic.

"Would the organisers be able to keep people from coming and gathering in large crowds?" said Froome in an Instagram Live chat with former international cricketer Kevin Pietersen on Sunday.

The Tour de France was originally scheduled to take place from June 27 to July 19 but was cancelled due to the COVID-19. The UCI announced that after discussions with the French government and sport stakeholders it had rescheduled the Grand Tour to start at the end of August.

The sport governing body also announced that all racing was suspended until July 1, while WorldTour men's and women's racing is suspended until August 1. A revised late-season calendar that will prioritise the three Grand Tours and five Monuments is expected to be published on Tuesday.

A possible revised 2020 UCI WorldTour calendar was leaked to Spanish newspaper AS that shows the Tour de France held from August 29-September 20, followed by the Giro d'Italia from October 2-25 and overlapping with the Vuelta a Epsaña from October 20-November 8.

The new dates for the Tour de France were questioned, however, after the French Prime Minister, Edouard Philippe, announced a banned all mass sporting events with more than 5,000 people until September. On the same day, the French Ministry of Sport clarified that such a ban might not affect the Tour de France but that it would have consequences for the number of spectators permitted to watch the race onsite.

"In theory we can put on the race and it can be broadcast on television," Froome said. "You're not going to get the same scenes as you would get going through these tunnels of just people everywhere and all the rest of it. Maybe that's the version of the race we need to see this year. I don't know."

Froome is a four-time winner of the Tour de France but he missed last year's race after sustaining serious injuries in a crash while training ahead of the Critérium du Dauphiné. He has indicated that he would like to win a fifth Tour de France title this year.