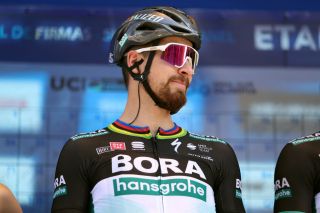 Peter Sagan is among the eight riders named to Bora-Hansgrohe's revised team roster for Paris-Nice. Sagan had been set to race Saturday's Strade Bianche, and some of his teammates were already training in Tuscany for the one-day Classic when it was announced on Thursday that it had been cancelled due to the coronavirus crisis in Italy.

Sagan was about to travel to Tuscany from his home in Monaco but will head to Paris for the start of Paris-Nice on Sunday.

Sagan has recently returned from a high-altitude training camp in Colombia, in preparation for the spring Classics and May's Giro d'Italia, which the Slovakian is set to ride for the first time in his career. He was also down to ride next week's Tirreno-Adriatico, which now also looks very likely to be cancelled as a result of the Italian government's decree to cancel all sporting and public events for the next month in response to the high number of coronavirus cases being recorded in the country.

Ackermann in UAE Tour: Sagan and I can split Giro d'Italia sprints

Sagan will be joined by seven other teammates at Paris-Nice, including his brother Juraj, Pascal Ackermann and German road race champion Maximilian Schachmann. The race will now have 19 teams of eight riders, rather than the original 17 teams of seven riders, both in order to accommodate more riders, who in many cases were set to ride Tirreno-Adriatico, and to make up for those teams that have decided to pull out of Paris-Nice, including CCC Team, Team Ineos, UAE Team Emirates, Astana and Mitchelton-Scott.

"We trust the health authorities of the individual countries and will act according to their guidelines," read a statement from Bora-Hansgrohe on Thursday in light of the cancelled Strade Bianche, with next week's Tirreno and Milan-San Remo, on March 21, also looking likely to be postponed.

"Therefore, we assume that there is no heightened risk for our riders or staff to compete in the upcoming races. Since this is a very changeable event, we are constantly evaluating the situation as matters progress."