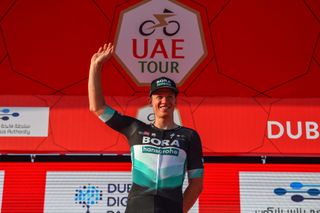 Pascal Ackermann (Bora-Hansgrohe) stormed to the win on stage 1 of the UAE Tour and confirmed his sprinting credentials after the sprinting heavyweights of pro cycling slugged it out on the road to the Dubai Silicon Oasis.

This was billed as the first stellar sprint of the WorldTour season with all but Elia Viviani missing from a start list that included Caleb Ewan, Mark Cavendish, Fernando Gaviria, Sam Bennett, and Dylan Groenewegen. However, at the line none of them could come close to the German sprinter with Ewan a distant second and Gaviria and Cavendish left trailing outside the top ten.

For Ackermann, this represented his second win of the season after he opened his account in Almeria last weekend, and while he will take confidence from this performance, he knows too well that he will be expected to win here once again when the road flattens out on stage 4.

Peter Sagan: I'm on the bike only for one reason - I want to win

Later in the year, Ackermann will aim for the sprints in the Giro d'Italia for the second time in a row. The decision to not race the Tour de France for the first time in 2020 may come as a surprise to some given Ackermann's continued progression but as he strode towards the winner's press conference in the UAE he explained the rationale to Cyclingnews.

"We want to have the most victories in the year and we want to try and win as much as possible. At the Tour de France this year there are just three possibilities for the sprinters, so we sat together as a team and thought that if we go to the Giro and the Vuelta then we have around 10 to 15 possibilities for the sprints. So we're going to try for that this year. Also with Emmanuel Buchmann, it's better for me to do the Giro and the Vuelta," he explained.

Ackermann will head to the Giro d'Italia alongside teammate Peter Sagan, who will be making his debut in the race after spending the bulk of his career chasing wins at the now-defunct Tour of California.

Ackermann and Sagan might both have fast finishes but they are entirely different types of sprinters. They both have huge power but Ackermann is far more devastating in a straight-line drag race. Sagan, on the other hand, can climb better than his German teammate, and for Ackermann, having Sagan in the Giro team is nothing but a bonus.

"We have two opportunities at the Giro with me and Peter, and have two options in the team is always good for us. We can maybe make a few surprises. I'm looking forward to the Giro," he told Cyclingnews.

"We have the same goal and we want to win together. In the last year, we tried to race together and it was always good. We're good friends and we can work together."

Here at the UAE Tour, the German sprinter was near faultless in the race to the line. He timed his sprint perfectly in the chaotic finale, while several of his rivals were either boxed in or had to fight from too far back. Ackermann had a share of luck in terms of how the road opened up for him but he still had to capitalize on the moment and then hold off the fast-finishing Ewan.

"It's never easy to have a good sprint but I saw the gap and I had a high speed. I tried to bring it to the finish line and I think that it was a big surprise for the other sprinters. I think that with the result that we can say that we got it right," Ackermann said during his press conference.

"We didn't look at the other sprinters because you never know who is in good shape. We tried something different from others and it worked out today."