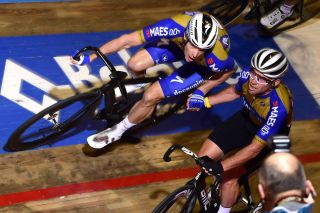 Mark Cavendish was able to bounce back from his crash on the opening night of the 2019 Gent Six to win the second Derny race of the evening on Wednesday night.

The British rider was forced to sit out the first Madison event on Tuesday evening after crashing in the one-lap time trial, with it having appeared that his back wheel had slid out from underneath him.

However, ahead of the start of the racing on Wednesday night, Cavendish told Belgian sports website Sporza.be that his crash was down to a new bike position that he'd been trying.

"I'm a bit banged up after yesterday, obviously, but I feel OK – thank you," the 34-year-old said in the video interview.

"It's a complicated story, but basically my position's changed; my weight's a lot more forward, and actually I hadn't done any test runs on a flying lap, and my weight was just too far on the front, and I just couldn't turn the bike," he explained.

"Going around the banking, I knew half a second before that I was fucked, really. I was still above the red [line], and I knew I was going down. It's a tight banking, you know? It's a real tight track; you really have to steer the bike, and I couldn't steer back," explained Cavendish. "I knew I was going to come down, so I could prepare for it, so I've come off a bit better. But it's not ideal, that's for sure."

Asked whether he was disappointed not to be able to show his good form, having finished second overall with partner Owain Doull at the Six Day London at the end of last month, Cavendish was confident that he'd be able to shrug off the crash.

"There are still five days to do that," he said. "Gent is the hardest Six Day. It's the Tour de France of track cycling. I'm always eager to show, but it's not easy to show. You have to be in your top form and have everything go right, and then you can fight for the win."

Indeed, Gent partner Iljo Keisse would go on to win the Super Sprint on Wednesday night before Cavendish then came up trumps to win the Derny race. Keisse and Cavendish – who won the Gent Six when they last rode it as a pair in 2014 – now sit sixth overall (out of 14 teams), on 58 points and a lap down on current leaders Roger Kluge and Theo Reinhardt of Germany, who have 59 points.