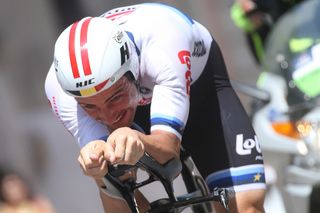 The current holder of the Hour Record, NTT Pro Cycling's Victor Campenaerts, has donated his prize money from winning the Nedbank Road Challenge race in Windhoek, Namibia, on Sunday to Physically Active Youth (PAY) – a local after-school programme for disadvantaged communities that combines education with physical activities, including cycling.

It was the 28-year-old Belgian's second trip to the southwest African country, where he also spent time training last year ahead of his successful Hour Record ride in Aguascalientes, Mexico, where he beat Bradley Wiggins' 2015 distance of 54.526km to record 55.089km.

Campenaerts: The Giro d'Italia time trials are my next big goal

Hour Record: Campenaerts to prepare in Namibia for April attempt

"Last week, Dan took me to see PAY, and that's where we got the idea that we could maybe try to win the race and donate the prize money to them, so that's what I'm going to do," Campenaerts said in a video of the riders on the podium, posted by HLN.be, before he passed the microphone to second-placed Craven, who explained a little more.

"Victor came up with the idea of donating his prize money, his livelihood, to the Physically Active Youth," he said. "I am older than him, and I'm taller than him, but I look up to him, because I am absolutely in awe.

"I literally had a tear in my eye when he sent me the message, and I'm struggling a little bit now, so thank you," said Craven.