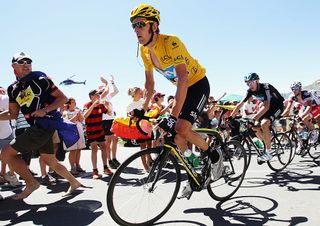 Bradley Wiggins believes that his former teammate Chris Froome can win a fifth Tour de France title after the current Ineos rider announced that he will leave for Israel Start-Up Nation next year.

Speaking on his Eurosport podcast, Wiggins backed Froome’s decision to leave Team Ineos after over a decade on the British team. The pair rode together at Team Sky but had a tumultuous relationship that almost boiled over at the 2012 Tour de France.

They never started another Grand Tour together, with Froome winning the first of his four Tour titles a year later. Wiggins would eventually leave the team and hang up his wheels but he admitted Froome’s decision to join Israel Start-Up nation was an indication that his former teammate was still hungry for success.

“I knew he was thinking of changing teams, I think he needed to really, I think he’s got a lot more in the tank, if he wants it. I don’t put anything past him, he can win another Tour, for me. I don’t know if he does want it, though, but by changing teams, that’s the biggest statement he’s made,” Wiggins said.

Froome’s decision to leave came in light of the fact that Ineos were content to build their future around 2019 Tour winner Egan Bernal. The squad took the unusual step of announcing that Froome would not be offered a new deal just hours before the rider’s transfer was confirmed to another team, and the leadership around this year’s race remains unclear.

Froome is returning from a career-threatening crash that took place in 2019 but he has repeatedly insisted that he is near his best form as the Tour looms. Ineos also have 2018 winner Geraint Thomas on their books but it’s uncertain as to whether team manager Dave Brailsford will select three leaders for the race.

“I think, on his day, [Froome] could still surpass certainly Bernal and maybe Geraint [Thomas]. He’s got a fifth Tour de France in him, and he was obviously thinking whether he would ever get that opportunity again at Ineos. By changing teams, he has probably given himself the best chance to win that fifth Tour.

"I know they don’t make decisions lightly, Chris and his team, so he would have put a lot of thought into it and it’s a brave move because there is no certainty in it at all. I see it as such a positive thing, and he’s really looking to go for that fifth Tour de France.”

Wiggins then claimed that Bernal – unquestionably the strongest rider in the Tour last year – would have cracked if the final two mountain stages had not been affected by landslides in 2019. The former UCI Hour record holder also insisted that Thomas was his favourite to win the Tour this year.

“Last year, Geraint Thomas was the defending champion at the Tour de France and Bernal was allowed to shine. I think had we had the stage to Tignes completed last year, I think Bernal would have cracked and Geraint would have won the Tour that day. Now you’d have to say, because Bernal was allowed to win the Tour de France last year, with Geraint as defending champion, the same should apply the other way around this year and Bernal is not granted that automatic right to defend the race. So Geraint is open to win the race this year and I actually think Geraint will win the Tour de France this year, no question about it, I don’t think there is an argument within that team.”

As for Froome and his prospects this year, Wiggins believes that despite the later date in the calendar owning to the COVID-19 restrictions, the race still comes too early for the veteran all-rounder and that he still needs time to regain his top form. Wiggins, if he were in charge, would select Froome for this year’s race but only in a domestique role and because of his previous reputation.

“I would guess that Chris Froome won’t be at the level this year to win the Tour de France, I think it might take another year of racing but who knows with Chris, I wouldn’t put anything past him. I do think he has a place in that team, I would take him purely based on what he has done for that team, he has been the face of that team for a number of years now. I also think Chris will be the first in there to say he’s going to help his teammates, but for me it’s a two-pronged race for Ineos between Thomas and Bernal."