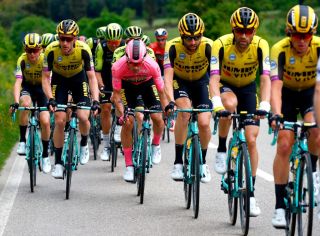 Bianchi replaces Pinarello as the bike of the Giro d'Italia and the three-year agreement with race organiser RCS Sport also covers the UAE Tour, Il Lombardia.

Along with the Giro d’Italia, Bianchi is also the official sponsor of the UAE Tour, the only WorldTour stage race held in the United Arab Emirates, Il Lombardia and from 20201 the Strade Bianche race.

The agreement will see Bianchi supply the Giro-E event with its Aria e-road model and the use of the Bianchi Lif-E electric intelligence mobility programme.

Bianchi will also be an official sponsor of the soon to be announced Giro d’Italia Virtual, a series of eSports rides on the virtual routes of key stages of the 2020 Giro d'Italia. The Giro d’Italia Virtual will be held between April 18 and May 10, with professional riders from eight teams riding with anyone on the Garmin/Tacx digital platform. Bianchi has created a special limited edition Aria –Bianco Italia bike for the Giro d'Italia Virtual, on sale online for a limited time at the Bianchi store.

Bianchi is one of the historic brands of Italian cycling and is based in Treviglio, south of Bergamo, one of the areas hardest hit by the COVID-19 coronavirus pandemic.

Bianchi bikes have been used by some of the biggest names in the history of cycling such as Fausto Coppi, Felice Gimondi, Marco Pantani and are currently used by Jumbo-Visma that include Vuelta a Espana winner Primoz Roglic, Tom Dumoulin and sprinter Dylan Groenewegen on its roster. Roglic wore the race leader's pink jersey for two days in 2019 and finished third overall behind Richard Carapaz and Vincenzo Nibali.

"Launching this partnership today, in this moment of uncertainty, is an indication of how we are already planning for the future. I am very happy about this agreement with Bianchi, an Italian brand, from close to Milan, like our group, which has become synonymous with ‘Made in Italy’ and quality that is renowned all over the world," CEO and General Manager of RCS Sport Paolo Bellino said.

"This partnership between Bianchi and the Giro is a dream come true," said Salvatore Grimaldi, the owner of Bianchi.

"At this dramatic and important moment around the world, we felt the time was right to reach this agreement, because now more than ever, the people of Italy and those around the world need a reason to dream, a way of looking forward. It is a historic deal between two big Italian names, both born in the Milan area and able to export the best of Italy through one of the most exciting and popular sports in the world, cycling."