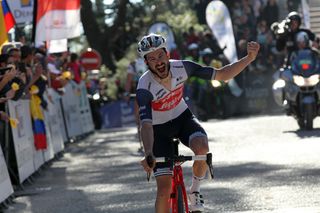 Julien Bernard is fully committed to supporting Vincenzo Nibali at the rescheduled Giro d’Italia later this year, with the Frenchman set to be a vital teammate in the mountains.

Nibali is looking for his third Giro d’Italia title, having won in 2013 and 2016. The 35-year-old moved to Trek-Segafredo over the winter after three years at Bahrain-Merida and will link up with Bernard at the Giro.

Bernard and Nibali only raced twice since Nibali moved across to Trek-Segafredo, with two one-day outings at the Royal Bernard Drome Classic and Faun-Ardèche Classic, but Bernard will have a crucial role in the mountains at the Giro.  The Frenchman is currently on Trek-Segafredo’s long list for the three-week Grand Tour and is excited about linking up with Nibali.

"Normally, I do the Giro with Vincenzo. It’s a big objective and I’m currently on track to be in good shape. To race the Giro with Nibali on the team is a big honour for me because he’s won it before and we’re going into the race looking to repeat that,” Bernard told Cyclingnews.

"I’ve got really good memories of racing the Giro in 2017. I did the hardest ever stage of my life that year on the Stelvio and I’m looking to riding like that again."

Bernard will use the French racing scene to prepare for the Giro d’Italia, although he’s currently involved in the Virtual Tour de France and recently won stage 2 in a nail-biting finish. La Route d'Occitanie at the start of August is likely to be his first real out on the road since the easing of the COVID-19 lockdown.

"Riding for Nibali for sure is an important job. I’ll have a big place on the team as one of the climbers and I hope to be in good shape."

Bernard, like most of the peloton, hasn’t raced outdoors since March but the Frenchman is an experienced athlete on Zwift – even before lockdown – and he used his knowledge to perfection at the weekend to take a win on stage 2 of the Virtual Tour de France.

The 28-year-old was part of a leading group that formed in the closing stages of the online race and then used his late sprint to deny the rest of the field. Bernard already won a race this year, stage 1 of the Tour des Alpes Maritimes et du Var, but a win online was still a welcome confidence booster.

"It’s not so often that I do sprints but I know that I’m quite light and that I have good power. On Zwift that works well and you need good tactics to wait for the right time to sprint," he said.

"Even though this is virtual I’m still really happy to have won. It shows that at Trek-Segafredo we’ve worked really hard during the stop in racing and that we’re now ready for real racing."