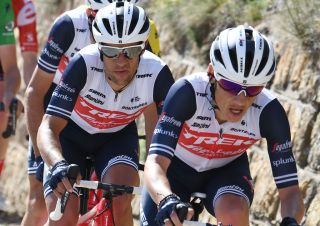 The Trek-Segafredo men's team have named their squads for the Tour de France and the Giro d'Italia, and revealed the two training groups will be based in France Alps and Italian Dolomites they prepare for the revised 2020 season.

The Trek-Segafredo women's team are expected to make similar arrangements soon as they prepare for the revised women's calendar.

Trek-Segafredo will return to racing at the Vuelta a Burgos in Spain in late July and then dive into the compact 71-day WorldTour programme with the Tour de France in September, the Giro d'Italia and major Classics in October and the 18-day Vuelta running until November 8.

"New dates for the most important events, Grand Tours and Classics first and foremost, was what all cycling stakeholders wanted. Now we have to outline the way to prepare the team in the best way," explained Trek-Segafredo team manager Luca Guercilena.

"It’s not easy with a compressed calendar, with three racing programs – even four – running simultaneously most of the time and also with few intercontinental transfers. But we are confident and satisfied with the work we are doing.

Richie Porte: I'll be ready to go to the Tour de France

Mollema: Porte and I know what we need to do at the Tour de France

“We have 28 riders on the men’s roster, and that is enough in an ordinary season, but it may be too limited for an extraordinary one. We are making an effort to select the right riders to achieve our goals, providing more scenarios in case of unforeseen events. The biggest difficulty is that significant choices must be made today if we want the riders at top condition, and this leaves very little room for changes, given the proximity of the races."

Trek-Segafredo had already confirmed that Vincenzo Nibali will target the Giro d'Italia, while Richie Porte and Bauke Mollema lead the Tour de France squad. The team has now selected nine-rider squads for both Grand Tours and they will prepare as two distinct units in the weeks before the races.

"We are about two months away from the start of the Tour de France, three months until the Giro d’Italia, and four to the Vuelta a España. In a normal situation, we would have indicative lists of riders who could be at the start, and we would have a roster of 10-12 riders to select from, also depending on their performance on the road. Not this year," Guercilena explained.

"We’ve drawn up a roster of nine riders for each Grand Tour. The reference group for the Tour will train at Isola 2000, except for Julien Bernard. For the Giro, the group will be at Passo San Pellegrino. The Vuelta is the only Grand Tour where we have more room to make decisions. The only certainty is that Mollema is the captain."

The nine-rider list for the Tour de France is made up of Bauke Mollema, Richie Porte, Jasper Stuyven, Niklas Eg, Alex Kirsch, Toms Skujins, Edward Theuns, world champion Mads Pedersen and French climber Kenny Elissonde. Teams and strategies for other races will be announced in the weeks ahead.

Altitude is a vital piece of training for Grand Tour riders but must be carefully included in training plans to have the right benefits. Logistical and health problems related to COVID-19 add other aspects and requirements, with Trek-Segafredo opting to create two separate groups of riders and staff to reduce the risk of contagion. The team made it clear that both camps will follow the strict medical UCI rules on testing and check-ups, in full compliance with the regulations of each country to minimize the risks of the COVID-19 pandemic.

"These confirmations give light on two fundamental events of the men’s season, but the work for the rest of the calendar also continues at a fast pace. We’re finalizing the detailed calendar for both teams and soon will announce the first steps of the women’s season, including their presence in the training camps and the most important races,” concluded Guercilena.