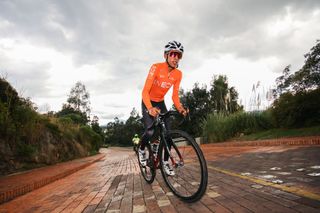 Egan Bernal (Team Ineos) has reiterated his desire to win multiple editions of the Tour de France and said that his status as defending champion will neither help nor hinder his chances in this year’s race.

The 23-year-old is set to line up at the rescheduled 2020 Tour as part of an Ineos team that will include 2018 champion Geraint Thomas and four-time winner Chris Froome if the Briton doesn't make a mid-season transfer to avoid a leadership battle with Bernal.

It will be Bernal’s third Tour appearance, having made his debut as a deluxe domestique two years ago, when he finished 15th overall.

In an interview with France TV Sport's programme Stade 2 programme, filmed in Zipaquirá, Colombia earlier this year, Bernal acknowledged that he would start the Tour under greater scrutiny than ever before.

“I won’t have the surprise effect this year. The public and the riders – everybody – are going to follow me a bit more closely,” Bernal said. “But it doesn’t matter whether you’re the favourite or not. On a race like the Tour de France, it’s always the strongest rider who wins.”

Bernal, who began his professional career in Italy with Gianni Savio’s Androni Giocattoli team, has hinted at the prospect of making his Giro d’Italia debut in 2021, but he told Stade 2 that his overarching ambition was to win more editions of the Tour de France.

“It’s like a drug. Once you’ve tried it, you want more and more. You never have enough. When you win a Tour, you want to win a second, and a third and a fourth… You want to win more and establish a record.”

Bernal is scheduled to travel from to Europe aboard a charter flight to Madrid on July 19 with his fellow Colombian professionals, and he is set to ride three stage races in France - La Route d'Occitanie (August 1-4), the Tour de l'Ain (August 7-9) and the Critérium du Dauphiné (August 12-16) – before the Tour Grand Départ in Nice on August 29.

“I want to provide the spectacle that the public is waiting for and to be up to the level of the race,” Bernal said. “I’m going to give the best of myself.”