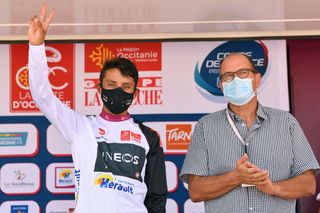 Tour de France champion Egan Bernal described himself as "tired but happy" at the end of his first day of racing since February's Tour Colombia and his first in Europe since last year's Tour of Lombardy.

After skillfully negotiating the tricky final kilometre on the opening stage of the Route d'Occitanie into Cazouls lès Béziers, the Ineos rider finished sixth on the stage and in the white jersey of the best young rider.

"It went well but I'm a little tired, that's for sure. The stage was hard, with a fast pace and it was pretty hot. It felt like a hard day, but a good one in terms of how my legs felt and for the training it gave us. All in all, I'm happy with the way I felt, but it's going to take a few more races yet to get the right feeling for competition," Bernal said at the finish.

"It's a special feeling to be back racing in Europe, it's been a long time for me. I think the last time was Lombardy last year. So it's good to be back again, especially as it gives us the chance to get a measure of some of the teams we'll be racing against for the rest of this year," he added.

The field in the French four-day race is particularly strong this year, with the likes of Pavel Sivakov, Miguel Ángel López, Thibaut Pinot, Romain Bardet among the GC contenders taking part.

Bernal noticed that the strength of the field: "has made for a very interesting contest. You could see that today.

"The pace was faster than it might otherwise have been and we had to remain close to the front and defend our position. I think all of the riders will be happy with the high level we've got here as they look ahead to the bigger goal of the Tour de France."

Monday's stage over three Pyrenean passes – Port de Balès, the Col de Peyresourde and the Col de Beyrède – is likely to decide the overall winner at Occitanie and Ineos have come with a team that should thrive that day. All seven of the British squad's members are on the long list for Tour selection, and Bernal picked out teammate Pavel Sivakov as the current pick of them.

"Pavel is very strong at the moment and we'll go into that stage aiming to do everything we can. I can't say that we're going to win, because you never know. There are some very strong riders in the field here, such as Thibaut Pinot, Romain Bardet, Miguel Angel López, riders of a very high level," said the Colombian.

Asked about the health requirements and any impact he perceived on his first competitive outing for six months, Bernal said that everyone has to take on the collective responsibility to stick to the anti-coronavirus rules.

"There were plenty of fans out of the road, which was good to see, but of course we've all got to respect the health requirements with regard to masks, washing our hands, even in keeping a distance from other riders.

"But this has all become part of everyone's life now. We all have to put on masks when we leave the house, so it doesn't seem so strange seeing people like this at a race. We'll soon get accustomed to it."