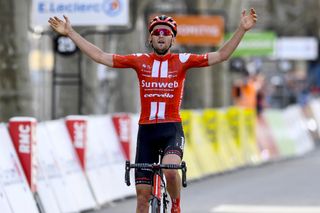 Belgium's Tiesj Benoot (Sunweb) says that he's looking for another big victory this season when, and if, the racing restarts later this year. The 26-year-old won a stage – and finished second overall – at Paris-Nice in March, but will now aim at a stage win at the Tour de France and at a one-day Classics victory.

"The team had never really wanted me to ride for the general classification at the Tour this year, and I think that's going to remain the case," he told Het Nieuwsblad on a Facebook Live interview on Wednesday.

"It's even better that that's the case this year when the Classics have been rescheduled to immediately follow the Tour, and so I don't want to finish the Tour completely exhausted," Benoot said.

"If you want to ride those Classics, the Tour de France is the only [Grand Tour] option," he continued. "The Giro d'Italia [October 3-25] coincides with the Flemish and Walloon Classics, and the Vuelta a España [October 20-November 8] starts too late.

"It's going to be tempting to take part in as many races as possible, but it's actually two months from the start of the Tour [August 29] to Paris-Roubaix [October 25], and that's a long time to try to stay in top condition.

"But I'll leave it [my programme] up to the team to decide. Whatever happens, it's going to be possible to race a big Classic each week."

The revised UCI calendar is set to kick off with Strade Bianche on August 1 – a race that Benoot won in wet and muddy conditions in 2018, and is keen to do well at again.

"I hope that Strade also fits on my programme," he said. "That should work. But now that the race is in the middle of the summer instead of March, it probably won't suit me as well.

"In Tuscany [in August] it will easily be 30°C to 35°, which means we'll probably get a really dusty edition, rather than a muddy race. But I'm not going to be put off by that. I have to be able to handle a race like that in any kind of conditions."

Benoot said that he was also looking forward to Liège-Bastogne-Liège, which has been postponed until October 4.

"That's two weeks after the end of the Tour de France, and I normally come out of a Grand Tour well," he said. "And the chance of bad weather is greater in October than in April, so that could be good for me, too. I also think that it's great that the Tour of Flanders [October 18] falls after the Ardennes Classics for once. That creates a completely different approach, and makes the challenge very special."