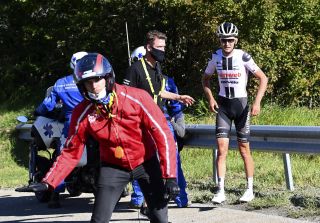 Sunweb’s Tiesj Benoot was lucky to be able to come away with only cuts and bruises after crashing at 60kph on a descent during stage 4 of the 2020 Tour de France (Image credit: Bettini Photo)

Team Sunweb's Tiesj Benoot was lucky to be able to walk away with only a few cuts and a bruised hand after crashing at what was estimated to be 60kph on the descent of the Côte de l'Aullagnier during stage 4 of the Tour de France on Tuesday, remounting a spare bike and completing the stage, ready to fight another day at this year's race.

Benoot had been part of the day's six-rider breakaway, and told the Belgian media afterwards that he'd been planning to attack on the next climb of the Côte de Saint-Léger-les-Melèzes when disaster struck on the Aullagnier.

"It was really stupid," Benoot admitted to Sporza afterwards. "I wanted to be in [Israel Start-Up Nation's] Nils Politt's wheel on that descent, and I closed a gap on him, but I went too fast in a corner that went around further than I expected.

"I felt my wheel shift, and then you have a panic reaction," he said. "You brake, and then you lose control. I saw the crash barrier approaching and started to think how I could land as softly as possible."

Benoot's bike hit the barrier, flipping the Belgian rider over it and into what was luckily some soft grass on the other side.

"I was really lucky," the 26-year-old said. "I know that it could have been so much worse."

Those who saw the footage of the crash will also likely have seen the TV pictures of Benoot's carbon-fibre Cervélo bike afterwards, too, which was snapped in two (which you can see in the stage highlights video below), forcing Benoot to take his spare bike from the team car, which he used to finish the stage in 117th place, 16 minutes behind stage winner Primoz Roglic (Jumbo-Visma).

"The mechanic wasn't happy. He's now going to have to put a new bike together for me tonight," Benoot told Het Laatste Nieuws.

Sunweb doctor Camiel Aldershof reported on the team's website on Tuesday evening: "Tiesj has some abrasions across his body and an injury to his hand that required an x-ray at the finish. The results show no fractures, but a contusion.

"He can continue with the race, and we'll keep monitoring his progress in the upcoming days," Aldershof said.