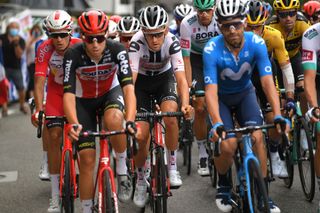 Tiesj Benoot has signed a two-year contract extension with Sunweb, the team reported on Monday, which will keep the 26-year-old Belgian at the German outfit until at least the end of 2022.

Benoot joined Sunweb from Lotto Soudal this season, and rode strongly at Paris-Nice in March, just ahead of the sport's shutdown due to the coronavirus pandemic, taking a stage win and second place overall behind Bora-Hansgrohe's Max Schachmann.

Benoot then raced at Strade Bianche, Milan-San Remo and the Critérium du Dauphiné after the recommencement of competition, and now forms part of an eight-man team for the Tour de France that is, he's said, comprised of "freelancers".

"We have no one who's going for the overall rankings," Benoot said in July when Sunweb announced their Tour squad. "We're aiming for stage wins with several riders.

"Cees Bol will go for the flat stages, and in the mountains we also have several options to join a breakaway, and I'm one of them," he said, with teammate Bol already having been in the mix on the opening stage, where he took third, and on Monday's stage 3, where the Dutchman finished seventh.

Benoot, meanwhile, sits in 86th place overall, 18 minutes behind race leader Julian Alaphilippe (Deceuninck-QuickStep), but with plenty of opportunities on the horizon for Benoot to go on the attack and try to make amends for his second place behind Mitchelton-Scott's Daryl Impey on stage 9 of last year's Tour, and take what would be first Grand Tour stage victory.

"All of the things I expected from the team last year before I joined have come true," Benoot said in a press release about his contract renewal on Monday. "I'm happy with how things worked at the start of the season and how things continue to work between us – it's a nice fit.

"I'm really looking forward to having a more long-term project with the team, and that's why we've renewed my contract," he explained. "It's also nice to feel that the team has confidence in me, and I'm looking forward to more great racing and getting some good results together."

Sunweb head coach Rudi Kemna added: "It's Tiesj's first year in the team, and we're happy with how things have been going. With such a good fit, we wanted to give ourselves more time to continue working in this way together with additional years to his existing contract.

"His strong early season results with a stage win at Paris-Nice and second on the GC showed that we have gelled well together so far. He is a really talented rider and we see his strengths in going for results in the Flemish and Walloon Classics, as part of our strong Classics block.

"On top of that, we want to develop Tiesj and see where his limits are as a GC rider in the future, working with our team of experts on his climbing and time-trialling abilities," Kemna said.

Additionally, there have been a number of changes that will give Sunweb a quite different look in 2021. In early August, the team confirmed the arrival of Romain Bardet from AG2R La Mondiale for next season, while in recent days it confirmed that Michael Matthews would leave the team to re-join Mitchelton-Scott next year.

Really happy with this news 👇! Excited for the future with my friends @TeamSunweb. Thanks for the confidence! https://t.co/0qUySE2EuIAugust 31, 2020