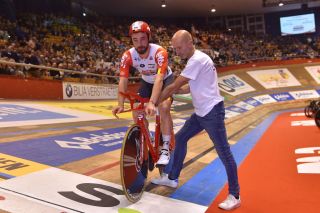 Victor Campenaerts is among the Belgian riders hoping for a spot at next year's Olympic Games, and after scouting the course, the 28-year-old says it's possible for him to medal in Tokyo, providing he is selected.

Campenaerts has already had meetings his new team – NTT, the rebranded Dimension Data – about his plans for next summer, with the team supportive of his ambition. His first meetings with national team coaches are yet to come, however.

Eventually, two time trialists will be selected, though the fact that both men have to ride the road race complicates things for Campenaerts. Selectors could possibly opt for a rider like Wout Van Aert or Laurens De Plus to provide assistance deeper into the road race.

With Remco Evenepoel already confirmed for a spot, the battle for the second place in the time trial will be fierce. Campenaerts will have to wait until May to hear if he has made it, but recently went to explore the routes in Tokyo, regardless.

"I immediately had very good contacts with the bosses and sponsors [of NTT]," said Campenaerts to Het Nieuwsblad. "It was nice team building. But I also explored the time trial course of the Olympic Games and I can tell you that it's tailor-made for the Belgians. It's very good for me, Remco Evenepoel or Wout Van Aert.

"By the way, on Wednesday I will be sitting down with coach Rik Verbrugghe, technical director Frederik Broché, and my coach to talk about Tokyo. Because with good preparation we can go there for a medal."

The course is a tough one, a 44km race taking in two laps of the Fuji Speedway motor racing track and the surrounding area. Two major climbs feature on each lap, while there are further rises throughout what will be big test for participators.

"That last mountain is really impossible to do," said Campenaerts after his recon. "I'm glad I did it by car. Anyone who gets over that will be among the ten lucky ones who battle for the victory."

Campenaerts recently returned to the track at the Gent Six Day, breaking another record seven months after his Mexico triumph. He took on the 5000-metre record at the 't Kuipke track, setting a time of 5:51 to smash Dirk Baert's existing 38-year-old record of 6:13.56.

"I didn't really prepare myself specifically," he said of his ride. "But I did have some contact with some track riders. They told me not to ride too much resistance on this small track, so I opted for a 58-16.

"But it was especially good to do this in a boisterous 't Kuipke. In Mexico, during my World Hour Record attempt, it was very quiet. It was also nice to say goodbye to Lotto Soudal after two wonderful years."