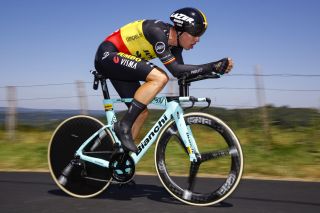 Jumbo-Visma’s Wout van Aert may hold on to his Belgian time trial champion’s colours for a little longer due to the news that the 2020 national championships will be postponed (Image credit: Bettini Photo)

The Belgian road national championships will not take place in the UCI's proposed slot for European nations' events ending on the weekend of August 22 and 23, according to reports in the Belgian media. The government says that mass gatherings will still not be permitted in Belgium in August, and therefore the national federation is looking for a date for the championships later in the year.

The Italian federation has already asked the UCI for their championships to be postponed until the end of October, while the French federation is looking at similar dates. The German and Dutch championships have already been cancelled entirely, and will now take place as normal in 2021, having skipped a year.

On Wednesday, Het Laatste Nieuws reported Belgian Cycling president Tom Van Damme as saying: "There will be no Belgian championship on the road in August."

He added: "It has been decided [by the government] that there will be no mass events until the end of August. It is better to look for another date in the following weeks.

One possibility could be towards the end of September.

"If the World Championships don't take place in Switzerland at the end of September [20-27], then there would be a new free place on the calendar. That's a possible option, but there are many," the director of the Belgian federation, Jos Smets, said, according to Het Nieuwsblad, referring to the uncertainty surrounding the Worlds, and the possibility that they could be moved from Europe to the Middle East in November.

"There are a few options, but I can't elaborate on that. It has been agreed with both municipalities to look at these options and to make a final decision on Friday," said Van Damme, with Koksijde set to host the time trials and Anzegem the road races.

"We have to be realistic and admit that the championships may not be able to happen at all, but that won't be for a lack of trying," he continued. "If public health and safety can be respected, we will do everything we can for them to take place."