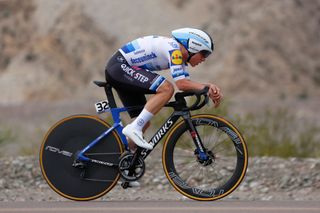 Belgium's cycling federation will not announce which rider will take the second of its two places for the Olympic men's individual time trial until early June 2021, according to reports in the Belgian media, with the Tokyo Games having been postponed until next summer due to the coronavirus pandemic.

Between now and early June next year, such candidates may have the opportunity to show their abilities against the clock at the European Championships in late August, the World Championships in late September, and in the time-trial stages at the rescheduled Grand Tours, among other races.

However, Belgian Cycling technical director Frederik Broché says that the decision as to who to select will not be made until June next year, having taken all factors into account, including the key aspect that both TT riders also have to form part of the five-man squad for the Olympic road race.

"If a Belgian rider wins the time trial at the World Championships, that would certainly play a part in our evaluation, but even then he would not be directly given a place for the Games," Broché said, according to Het Nieuwsblad on Wednesday.

Matters are complicated further by the fact that, as things stand, the Olympic men's road race – which the TT riders would have to ride – is due to take place on Saturday, July 24, which is a day before the end of the 2021 Tour de France. The Tour will arrive in Paris on Sunday, July 25, which many of the candidates are likely to be taking part in for their professional teams.

The 2021 Tour dates may yet be able to be moved, although Grand Départ hosts Denmark feel that they're unable to schedule the Tour any earlier than its current July 2 start date due to Copenhagen also hosting matches as part of the UEFA European Football Championships in late June, with Euro 2020 having been postponed to 2021. That, in turn, has led Tour organiser ASO to reportedly consider Brittany as a possible replacement host of next year's Grand Départ at an earlier date.

"If everything happens as currently planned, the Games will coincide with the Tour in 2021, so a choice has to be made," Broché said, regarding possible candidates for the Olympic TT place who may be considering riding the 2021 Tour.