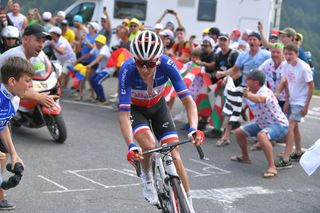 The reigning French road race champion, Warren Barguil (Arkéa-Samsic), was able to enjoy his first post-coronavirus-lockdown outside training ride in his home region of Brittany on Monday on the back of some measures being eased by the French government, and he finished it more enthused about riding his bike than ever.

"It made me so happy," Barguil said on his team's website. "It was amazing to be able to enjoy being outside, riding in the open air, on beautiful roads that I know so well, but which I'd missed.

"And, to top it all off, I was able to ride outdoors in my magnificent French champion's jersey," he said.

Nothing was going to stop the 28-year-old getting out for proper ride for the first time since mid-March.

"I had a lot of friends who weren't so keen to go out because there was rain forecast, but in the end there wasn't a single drop. It was pretty windy, though, and for a moment I thought I'd left the fan on that I use when I'm riding on Zwift," he joked.

Barguil lives close to Lorient, and was pleased to be able to enjoy some familiar roads on his outing. He's raced for just seven days this season: the four days of the Tour de la Provence, one-day races the Ardèche Classic and the Drome Classic – where he was second – and the opening day of Paris-Nice, from which he was disqualified after sheltering behind his team car when trying to make it back to the bunch after a crash.

"I rode to the coast on a route I often do, and which has great views – although I may have appreciated them more than ever today. It's always great to be able to ride to the sea," he said.

"The self-isolation measures imposed during this pandemic were necessary to help try to safeguard our country. It had to be done, and protected us, I'm sure," said Barguil. "It means that now, for us as pro riders, being able to get out on the roads is such a joy. The road is our workplace – our office, if you like.

"My next step will be going to the forest this weekend, where I'm looking forward to being able to see the positive effects that confinement will have had on our environment thanks to Mother Nature," he said.

Barguil took the tricolour French champion's jersey last June, and now looks set to wear it at the Tour de France – this year postponed until August 29-September – for the second year in a row, with the French championships potentially not taking place until October.