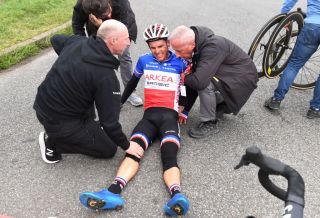 Warren Barguil on the ground after crashing during stage 1 at Paris-Nice. He was later disqualified for drafting (Image credit: Bettini Photo)

Team Arkea-Samsic have accepted without protest the disqualification of rider Warren Barguil for drafting behind the team car following a crash during stage 1 at Paris-Nice, saying the Frenchman was out of sorts after his fall and was deciding whether to continue or abandon.

"We take note of the decision of the jury of commissars who officiates on this 2020 edition of Paris-Nice concerning our French Champion, Warren Barguil, and of course, we accept it," the team said in a post on their website.

Barguil crashed with 61km to go as crosswinds started to cause echelons to form in the peloton, hitting the deck with AG2R La Mondiale's Romain Bardet and one other rider.

Paris-Nice: Bardet and others down and out as puncheurs steal a march on climbers in crosswinds

The peloton had started to split after a Team Sunweb acceleration through the corner, and while most of the peloton went on the right-hand side of the roundabout, a small group, including Barguil and Bardet, went left. It's not clear what caused the crash.

Although Bardet was able to quickly remount and finished more than two minutes down on stage winner Max Schachmann (Bora-Hanbsgrtopher), Barguil lingered on the ground, eventually remounting and finishing 14 minutes down. The French champion also lingered behind the team car as he made his way back toward the race, getting the attention of officials.

Arkea-Samsic said Barguill had no intention of violating the rules or spirit of the race and was only riding behind the team car while trying to gather his senses and decide if he would continue or abandon.

"The rules and laws are made to be enforced, after there is also sometimes the spirit, and the fact that Warren found himself in this contentious situation for the referees of our sport is linked to the fact that he was groggy after his fall and did not yet know what decision to take: continue or abandon Paris-Nice," the team said.

"He thus drove for a few kilometers, sheltered by the sports director who found him at the edge of a roundabout after his fall, without having the will to go against the rules laid down, quite the contrary, or to cheat," the team said. "The only goal was to help him regain his senses and put him back, if possible in the race."