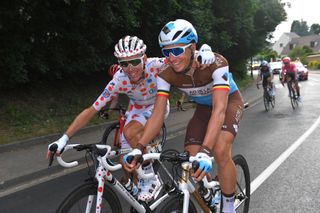 AG2R La Mondiale have confirmed more details and rosters ahead of the resumption of racing later this summer. As expected, Romain Bardet will return to action with the Route d'Occitanie (August 1-4), CIC Mont Ventoux Dénivelé Challenge (August 6) and Critérium du Dauphiné (August 12-16).

Although missing from Friday’s announcement, the team and Bardet have already confirmed that the Frenchman will also race the Tour de France in August and September, despite the fact that the pre-COVID-19 schedule had Bardet missing the Tour for the Giro d’Italia.

Bardet, who is also out of contract and in advanced discussions over a move to Team Sunweb for 2021, will use the Dauphiné as his final warm-up race for the Tour. He has twice finished on the podium in the Dauphiné and won a stage of the race in 2015. Bardet is also targeting a spot in the UCI Road World Championships if the event takes place in Switzerland as originally planned.

Benoît Cosnefroy, the only AG2R La Mondiale rider to win a race this year, will come back to racing at the Tour de l’Ain (August 7-9), Critérium du Dauphiné (August 12-16) and then race the Tour de France.

The team’s leading Classics specialist, Oliver Naesen, who earlier this month signed a contract extension, will resume his season at Strade Bianche (August 1) before embarking on Milan-Turin (August 5) and Milan-San Remo (August 8). The Belgian rider picked up his maiden Monument podium in Milan-San Remo 12 months ago. He’s also expected to race the Tour de France later in the year before turning his attention to the Cobbled Classics.

"The entire crew of sports directors and coaches have worked together to establish a schedule that is as consistent as possible. We know it will be very densely packed and with no real break until the finish of the Vuelta, which ends on November 8," said sports director Laurent Biondi.

"This new schedule will also allow a rider like Oliver Naesen to discover the Strade Bianche and Milan-Turin, before defending his podium of last year at Milan San Remo. It also gives someone like Romain Bardet the opportunity to race on the roads of the Route d'Occitanie, which he has not attended since 2013.

Then there is the chance to take on the Walloon classics after the Tour de France and the Worlds. The whole team is very motivated and, by the time we resume racing, we hope that the pandemic infection numbers will continue to decrease. It will be an unprecedented season and we are all looking forward to returning to competition."

Racing has been put on hold since the widespread outbreak of COVID-19 in Europe. The UCI has worked on a post-lockdown calendar and all three Grand Tours are now scheduled to take place within a 71-day window.