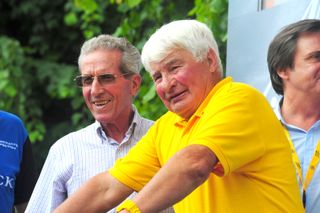 "He was a real country man through and through, and his love of rural life gave him a  very healthy outlook on things," Bahamontes, who won the Tour in 1959, observed to Cyclingnews on learning of Poulidor's death.

'The Eagle of Toledo', widely rated as cycling's greatest ever climber and now aged 91, fought many battles against Poulidor in the 1960s.

Their most notable encounter was arguably in the 1964 Tour de France, where, like Poulidor, Bahamontes took a stage in the Pyrenees.

Bahamontes finally finished third  overall that year in Paris behind the winner, France's Jacques Anquetil and Poulidor, second for the first time of several in his career.

"Sometimes Raymond didn't 'read' a race from his rivals' point of view often enough, but overall he was a very good racer in many different areas," Bahamontes added.

"Like me, he had a very long career, and as a person, he was exceptional - and different to Anquetil, too, who was, at times, quite odd.

"Being such an open sort of guy partly explains whey Raymond was so widely loved in France – he was 'Poupou', very easy to approach."

Bahamontes argued that Poulidor's close relationshp with team management paid off handsomely for the 1964 Vuelta a España winner.

"He and Antonin Magne" – Poulidor's director in Mercier until 1970 – "were very close. They were both born in the countryside, and as a result they stuck together like glue and worked well together, and that was another one of Raymond's many strengths."

Raymond Poulidor, one of the most loved riders in cycling history, has left us today. 😭 Merci pour tout et ALLEZ POUPOU! 💛 pic.twitter.com/abWu0R6YbONovember 13, 2019