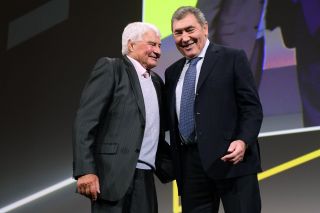 Eddy Merckx mourned the loss of Raymond Poulidor on Wednesday morning, saying that he's been hit hard by the death of his old rival and good friend, noting that the cycling world has lost an icon and a monument.

83-year-old Poulidor passed away in the early hours of Wednesday morning after a two-month stay in hospital. He and Merckx raced against each other at the Tour de France five times between 1969 and 1975, with Poulidor finishing on the podium three times behind the Belgian.

"The cycling world loses a monument, an icon," said Merckx to Het Nieuwsblad. "You can't imagine how loved Poupou was in France – every year I saw that at the Tour. France loved his charm.

"We have Jacques Anquetil and Bernard Hinault as the unforgettable riders in France, but don't hesitate to put Raymond Poulidor in the picture.

"[He is] maybe the sportsman who was the most popular in France. A monument of a sportsman and a man is no longer with us. I've been hit very hard."

As well as at the Tour de France, Merckx and Poulidor came head-to-head elsewhere, including at Paris-Nice. It was at that race where Poulidor got the better of his rival in 1972 and 1973. Then in his late 30s, twice triumphed over the Belgian by a matter of seconds.

"He didn't give gifts – if he could beat me, he would," Merckx said. "Witness his victories against me in Paris-Nice, where he put me out of the leader's jersey in the time trial on the last day.

"People sometimes say he was 'the eternal second', but don't forget that he has Milan-San Remo, the Vuelta a España, La Flèche Wallonne and other big races on his palmarès."

Merckx went on to say that he had grown close to Poulidor, especially after the pair had retired, adding that he admired the Frenchman on a personal level, and enjoyed the time the pair had spent together.

"I've seldom met such a charming person," he said.

"He was a very good friend of mine," Merckx told Het Laatste Nieuws. "We spent a lot of time together especially after our career. I often went to eat with him, he was a very jovial person."