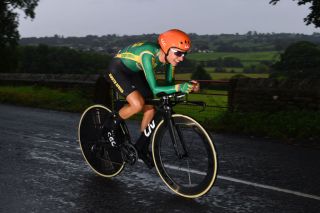 Ashleigh Moolman-Pasio could barely fight back her tears as she walked through the mixed zone after the elite women's time trial at the UCI Road World Championships. The frustration of a season full of bad luck had mounted and then reached a breaking point after a series of ill-timed mechanicals led to a bike change, and the irritating disruption of rhythm knocked her out of contention in the Harrogate time trial.

"I'm actually struggling to understand why," Moolman-Pasio told Cyclingnews. "Another mechanical. It's been a year full of mechanicals and crashes, and I just thought it would be over by now."

Moolman-Pasio came into the time trial sure that she could finish in the top 10, but aimed for a top 5. The 30km course was flat for the first 14km and then hilly into the technical final in Harrogate. It suited her strengths and skills. She took her place on the starting ramp, but the first sign of trouble with her bike came almost immediately, through the opening chute in Ripon.

"I started the time trial and going down the chute, I slipped a bit, but I didn't think too much about it," Moolman-Pasio said. "Then the bike just started changing gears.

Moolman-Pasio didn't want to take an immediate bike change, which would inevitably cost her more time. She hoped that the gears would settle but had no such luck. She ended up stopping to change bikes after the second climb, but by then it was too late. She had lost too much time to the other top 10 contenders.

"I didn't want to do a bike change, but I got to a point where it was uncontrollable, and so we had to do it," she said. "The time it takes to do a bike change is just not ideal. Once we had done it, though, the second bike was much better, and I managed to gain some rhythm.

"But I had already lost so much momentum, and it was game over. It wasn't to be."

A season of crashes, injuries and mechanicals

Moolman-Pasio started her season on a high. She signed a new contract with CCC-Liv that allowed her to race with her long-time mentor Marianne Vos. She had strong prospects for the Spring Classics, mid-summer stage races and the World Championships.

It would be an understatement to say that her season has not gone according to plan, or anyone's expectation, including her own. Almost from the word go, she has dealt with blow-after-blow of lousy luck.

She first crashed at the Tour of Flanders. Her wheels got stuck in a crack in the middle of the road. She told Cyclingnews that she had hit the ground, hard, and slid across the road into the ditch, coming to a stop in stinging nettles.

It happened again at Amstel Gold Race, a crash in the final sprint, just two days away from her targeted Flèche Wallonne. She ended up seventh at Flèche but realised that she was more injured than she previously thought. An MRI showed that she had a compression injury to her compression of the L4 and L5 vertebrae, and she was forced to the sidelines to recover.

She thought her season was over, but after consultation with her coaches and doctor, she was approved to return to competition at the Tour of California where she finished third overall. She went on to finish fourth at the Giro Rosa in July. She had hoped for better results at both races, but they were strong performance considering the interruptions to her training and racing due to previous injuries.

With a strong second half of the season, she turned her attention toward preparations for the World Championships - the time trial and the road race - to events held on punchy courses that suit her well.

But cycling can often become a test of will rather than strength or skill. Luck had tested Moolman-Pasio's will more than she would care to count this season.

"It's an accumulation," she told Cyclingnews. "It's just race after race. I'm sorry I'm emotional, I try not to be, but it's accumulation through the entire year. These things happen, I know. Maybe if it were only two or three times, but it's been more like 10 or 15 times."

Moolman-Pasio tried to calm her frustration from the outcome of time trial where she finished 32nd place and 6:15 slower than newly crowned world champion Chloe Dygert Owen.

Instead, she weighed her prospects in the upcoming elite women's road race held on Saturday.

The women will race 150km starting in Bradford and travel as north as Masham, in North Yorkshire, before looping back south toward the three undulating finishing circuits in Harrogate.

"Anything can be better than the way that this year has gone," Moolman-Pasio said. "If I can just have a smoother race, it would be an achievement."

Moolman-Pasio would indeed welcome a race without a crash or a mechanical. Luck aside, and on the merits of strength and skill alone, she is one of the top contenders to watch for the world title.

The route resembles those of the Ardennes Classics where Moolman-Pasio is always a favourite. She has shown her strengths in the three events over the years. She placed second at Flèche Wallonne and fourth at Liège-Basatogne-Liège last year, and she was among the top 10 in all three races the season before.

"I love Classics-type routes. I'm a Classics rider. I love the unpredictability of the race, the challenge, the race of attrition," Moolman-Pasio said, slowly regaining a positive outlook.

"I'm hopeful. If everything goes my way, which hasn't been the case this year … but let's be hopeful.

"I hope, again, just for some good luck."