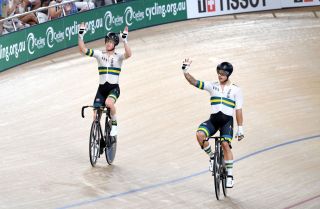 An Australian national team staff member who worked at the recent UCI track World Championships in Berlin has tested positive for coronavirus.

The Adelaide-based man was diagnosed with COVID-19 on the night of March 16, which was 12 days after his return to Australia from Germany on March 4.

Cycling Australia in a press release did not specify where and when the man was tested, or when he first reported feeling ill.

"The staff member had minimal contact with fellow staff and athletes after returning from overseas and had no in-person contact with staff or athletes after beginning to experience symptoms. He is currently receiving appropriate medical care," the statement read.

"The Adelaide Super-drome offices and training areas have been closed as a precautionary measure, with all Australian cycling team staff and athletes instructed to remain at home.

"The Super-drome has been cleaned and disinfected in preparation for return to work and training over the weekend, and when the team return a social distancing policy will be implemented to support ongoing risk management."

Meanwhile, a Cycling Australia spokeswoman has said all track riders who are part of the national team program are in Australia following the championships and ahead of the Olympic Games.

Road and track cycling have been brought to a halt due to the global coronavirus outbreak. ASO on Tuesday added the Tour de Yorkshire, Paris-Roubaix, Liege-Bastogne-Liege and Fleche Wallonne to the long list of road events that have been postponed in lieu of the health pandemic.

Some Australian road cyclists had planned to use the spring classics to further their respective cases for Olympic Games selection.

"Staff and coaches are currently working through all areas that COVID-19 has affected across all teams. Event cancellations that are listed as performance standard events or contribute to qualification quotes are two of many areas," she said.

The Australian track team for Tokyo 2020 is scheduled to be announced on Thursday. The road squad will be announced on May 3, BMX freestyle on May 27 and BMX racing and mountain bike on June 17.

The International Olympic Committee (IOC) is optimistic about the Games proceeding as planned even though most international sports are currently suspended.