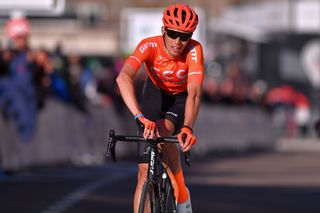 While Cyclingnews and the wider cycling community wait for the resumption of competition once the ongoing coronavirus pandemic has been brought under control, those pro riders who are being forced to try to maintain a semblance of form on their home trainers have been looking for new ways to help pass the time.

Enter CCC Team's Attila Valter, who has taken the footballing 'keepie-uppie' #toiletpaperchallenge that has been so popular on social media of late and reinvented it for cyclists as the #toileTTpaperchallenge, seemingly challenging them on Wednesday to beat his record of seven toilet rolls balanced on his back while down in the time-trialling position on his turbo trainer.

Coronavirus: Riders in lockdown get creative with entertainment and training

George Bennett on life in lockdown and losing at Zwift

While CCC Team leader Greg Van Avermaet recently showed off his skills honed in his younger days as a football player – a goalkeeper, in fact, for Belgian side KSK Beveren – with his #toiletpaperchallenge effort, 21-year-old Hungarian rider Valter is busy making his mark, so to speak, in his new WorldTour team, which he joined this season from the CCC Development Team.

Valter managed to get seven race days under his belt this season before professional cycling's racing shutdown, finishing 28th overall at the Tour de la Provence in mid-February before going on to take an extremely respectable 10th overall, and winning the best-young-rider classification, at the Tour des Alpes Maritimes et du Var at the end of the month.

We're still unclear here as to the full extent of the new #toileTTpaperchallenge rules – we're not sure that you even need to be on a time-trial bike, to be honest – but, with apologies to Attila, we're pretty sure that seven rolls is very beatable.