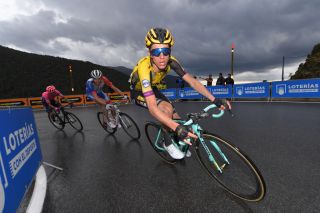 George Bennett (Jumbo Visma) may not be allowed to ride his bike or venture outside for more than essential groceries but the Kiwi climber and his girlfriend Caitlin Fielder have tried to keep their spirits high and the perspectives open as they live through life in a coronavirus lockdown.

The pair live in Andorra where cycling is currently banned. Bennett can still shop for food but his riding has been limited to online training and racing, while Fielder passes the time with her cycling business. She paints shoes for some of the best riders on the planet [ed. we have a feature coming ] with orders currently flooding in from the likes of Primoz Roglic and Luis Leon Sanchez.

Under normal circumstances, Bennett would be racing at Volta a Catalunya right now, with one eye on his major objective of the season, the Giro d’Italia. However, both races have been pulled from the calendar and Bennett’s days are a mix of indoor training and talking to contacts back home. He hasn’t ruled out flying home to New Zealand but under current conditions, it might be safer to stay in Europe.

“We spend the first two hours of every day looking for updates and talking to people in New Zealand,” Bennett tells Cyclingnews when asked about the format of his typical day in lockdown.

“We have a few key contacts back home and have our ears close to the ground on whether we’re going home or not. We’re hoping to ride things out here but we know that ultimately if the world comes to halt and things become worse than we can all imagine, then we want to be home with our families.”

Bennett’s concern when it comes to leaving centers around travel restrictions and of course the increased chance of picking up coronavirus as he and Fielder – who recently went through surgery – travel to the southern hemisphere.

“The big worry we have is over travel bans and if flights start to dry up. We’re trying to push it as late as we can. It’s a lot to put yourself through, to have a long-haul flight when you don’t have all the information you need. My girlfriend has just had hip surgery, so going through airports isn’t ideal and you might end up picking up the virus. We’d have to be quarantined at home too, which isn’t really a problem but then we could end up swapping our current situation for the same thing back home? No one knows and no one can say.”

After his morning updates, Bennett turns his attention to training. His Jumbo-Visma team have been excellent in supporting their riders, both in terms of their physical and mental wellbeing, but Bennett still needs to remain in relative shape for the time being. Luckily he’s not alone in Andorra with several riders nearby. They can pass the time with online group riders but the online format doesn’t typically lend itself to skinny mountain goats like Bennett.

“Then I try and get on the trainer for a while. Other than that you become pretty pro and being a time-waster. I might head to a Zwift race and get my head kicked in,” he jokes.

“I’ve not managed to crack the top-10 yet in a race, which is kind of depressing. They’re hard. It doesn’t help living at 2,000 meters but the team has told us that we’re not going to be racing for a long time. They’ve told us not to worry too much about training and not to try and stay too skinny because at some point we’re going to have to really lock it down and try to train hard. When that happens we’re really going to need bullets for that moment. So we’re doing what we can do try and make it fun.

“I’m up here with a few boys in my building and we’re trying to do what we can to make it passable because normally for me the trainer is something that’s reserved for when it’s literally unrideable outside but the team have been awesome. They’re focused on our mental and physical wellbeing and they’re encouraging us to put cycling to the back of our minds as we ride this out.”

One of the biggest challenges is dealing with the levels of uncertainty surrounding the virus and the longevity of some of the measures that have been put in place by authorities. Bennett still has ten days of lockdown to go but there’s also a realistic chance that those restrictions could be extended for a much longer period.

“At the moment we’re locked inside for ten more days but the realistic outcome will come if we’re told that we might have to be in lockdown for another month or six weeks. That’s when we might be better trying to get home. There’s a lot that comes with going home, it’s not as easy as just getting on a plane,” he says.

While races have been halted for the foreseeable future there is talk that some events could return in June. That looks optimistic given the current situation and the rate at which major sporting events are being removed from the calendar. Even the Olympic Games – the biggest global sporting event in the world – is under pressure to postpone its Tokyo edition later this summer.

Bennett is working towards a June return but he knows that this could be overturned. However, it’s about remaining upbeat, positive, and ready to race should get the call.

“You want to try and focus on other things but if you’re not optimistic then you wouldn’t be a great pro cyclist. The best case scenario is that we’re racing in June but if you think that it’s August but you do end up racing in June then you know it’s going to be a complete dogfight. It’s going to be a really scrappy season and if you’re not ready in June then you’re going to really struggle. I’m going to get myself ready for June.”

As a pro athlete, it’s also difficult to process emotions over the virus and its effects. Bennett, like all the other members of the peloton, has seen his entire 2020 put on hiatus, and the New Zealander was meant to lead Jumbo-Visma at the Giro d’Italia in May, in what would have been a huge opportunity and responsibility. While losing that chance is obviously a blow Bennett completely understands the severity of the pandemic and all the truly important implications that come with it.

“You feel like a dick being upset that there are no bike races but that’s inevitable,” he says.

“Something like the Giro was a massive opportunity for me. They handed me a leadership role and I know there’s some talk of the Giro starting in late May but there’s no chance of that happening. I doubt the Olympics will happen and we might have a Tour de France in August. It’s going to be really messy and it’s going to be interesting to see how people come out of this. Some are naturally talented but some need to shut things down and train really hard.

"We’ll remember these times for the rest of our lives. The truth is you can be disappointed about races being cancelled but still respect the rules. There are millions of people locked in their homes right now.”