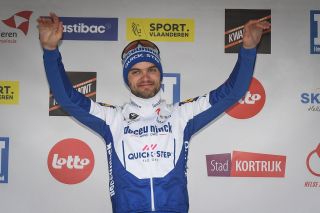 Tom Steels and Wilfried Peeters, directors sportif at Deceuninck-QuickStep, glanced back on the Belgian opening weekend while standing at the team bus in Kuurne on Sunday afternoon. The team managed a second place at Omloop Het Nieuwsblad with Yves Lampaert and a win at Kuurne-Brussel-Kuurne with Kasper Asgreen.

"That's about as good as last year. We're happy. They're all ready to head into the Classics; they're all super motivated," Steels said.

"We performed strong as a team and individually. If they're good, it allows us to have more tactical options than other teams. I'm pleased that everybody is good. Sometimes we lacked the focus during the race but they showed they had the ability to set things straight. It's a big change to switch from the sun on the wide roads during the training camps to the wet, narrow roads in Flanders where it's so bloody nervous."

Peeters added, "The race in Kuurne was different compared to other years. One can say that we didn't take the race in our hands like we did in other years but on this course it was important not to go crazy on the narrow roads because it was still very far. We just closed the gaps. If we went for it, we had to go for it until the finish and then it's much harder. We knew this race would be hard to control so we decided to wait until the local lap to decide whether we would go for the sprint with Fabio or not. It's known that we don't have team leaders. Everybody has a chance, like Bob, Stybar, Lampy, like Fabio and Kasper. Of course, there's riders who ride in support but there's riders who can set up something; that's a difference."

Steels, a former top sprinter, also talked about the race finish in Kuurne and how difficult it was for the team's sprinter, Fabio Jakobsen, to ride a good sprint while he had a teammate riding just in front of the peloton in the final kilometres.

"If Kasper would be caught back we still had the option to go for Fabio Jakobsen in the bunch sprint; we could gamble on two horses. Then again, it's difficult to sprint in such a situation. You can't lead the sprint out with the whole team because you want to hold back. It's looking good but it's all or nothing," Steels said.

Peeters said he was worried about how the final kilometre would unfold and he talked about 'in-sprinting'. "I was afraid that we would end up empty-handed when we would be in-sprinting him. If you're waiting to long, to avoid that he's caught back then you're done with; you're not riding a proper sprint. He finished fourth now but if Asgreen wouldn't be ahead then that would be different," Peeters said.

Steels, 48, works closely with Sunday's winner Asgreen. "Yesterday he rode a strong race but outside the spotlights, and today he did the same but now it was in the picture," Steels said.

On Saturday at Omloop, Asgreen dropped his chain when the race was kicking off. It took a long time before he got back into the main chase group behind the lead group with teammate Yves Lampaert. Once there, he neutralized every move that brought the breakaway in danger, especially the one with Wout van Aert and Tiesj Benoot.

On Sunday at Kuurne, Asgreen attacked the peloton just before the long breakaway move was about to be caught back. Steels wasn't surprised to see Asgreen making that move at that particular point at 29km from the finish. "He's smart, in terms of racing intellect. We train our riders to make the right calls themselves during a race. It was our call to close the gap on the large breakaway group where we only had Zdenek Stybar. A gap of twenty seconds at that point of the race was too much," Steels said.

The group of 20 riders with many sprinters was caught back at 40km from the finish. Asgreen attacked ten kilometres later and was joined by two survivors from the long breakaway move. "It was his call to attack there. Last week I did a recon of the course with Kasper, especially the finale. We knew that if we would attack there, then others would be in trouble, or at least make a big effort to come back," Steels said.

"It was ideal to have Kasper up front. Having those two other riders with him wasn't a good thing though. In the section into the crosswinds he managed to drop the most important one, sprinter Roy Jans. He struggled in the last section into the headwind but from there he probably managed to recover, if that's possible, in the tailwind section. That's the benefit of being a good time triallist. They can ride at a certain pace but they can also die on the bike and still keep going," Steels added.

The 25-year-old Danish rider joined the team on April 1, 2018 and has been a great addition. The result that stands out is his second place at last year's Tour of Flanders but he was also part of the team that won the team time trial at the 2018 World Championships in Innsbruck. He rode a strong maiden Tour de France in support of Julian Alaphilippe, meanwhile managing an impressive second place in stage 18 from the Pont-du-Gard to Gap. He also broke his bike without breaking a bone himself during the Tour de France. Patrick Lefevere described him as 'the engine of the team' during that Tour de France.

"He loves the one-day races. Riding these Classics as a foreigner … I think that's why he's racing, to win a Belgian Classic," Steels said. "From the first day Asgreen joined our team he made a remarkable impression on me. It was in the Scheldeprijs and it was clear that he had a big engine. He's an exceptional guy who can ride really hard. He's very serious about his profession while having a laugh too.

"His biggest exploit so far for me, was in the team time trial in Innsbruck; he rode remarkably strong there. We can use him on every terrain. He's explosive too because he can deal with the short climbs. I have to think about the way he rode last year during the Tour de France in the stage that was won by Matteo Trentin," Steels said.