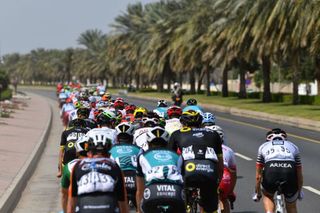 Riders at the 2019 Tour of Oman, which in 2020 takes place just a few days after the conclusion of the new Saudi Tour (Image credit: Getty Images)

Amnesty International has urged riders participating in the inaugural Saudi Tour in 2020 to use their platform to draw attention to human rights violations in Saudi Arabia.

Tour de France owner ASO's organisation of the race has drawn criticism from human rights advocacy groups, although Amnesty has stopped short of calling for a boycott of an event that it has decried as an example of so-called sportswashing.

"We're not saying that individual riders or teams should boycott the Saudi Tour – we're saying that if they go, they should inform themselves of the human rights situation in Saudi Arabia and be prepared to speak out about this," Amnesty International UK director Kate Allen said in a statement to Cyclingnews.

The Saudi Tour, which will be held from February 4-8, is one of two sporting events that ASO will organise in Saudi Arabia in early 2020, with January's Dakar Rally set to take place entirely within the country.

ASO has refused to answer questions from Cyclingnews regarding its organisation of the Saudi Tour and declined the opportunity to defend itself against the charge that is implicated in an effort to 'sportswash' Saudi Arabia's human rights record.

The Tour de France owner is among several sports bodies that have looked to bolster their finances by organising events in Saudi Arabia since the establishment of a sports development fund in the country in late 2016. That directive has seen Saudi Arabia follow its neighbours Qatar and the United Arab Emirates by actively lobbying to hold prestige sporting events in an attempt to boost its reputation internationally.

Saudi Arabia has recently played host to PGA European Tour golf, WWE and Race of Champions motorsport events, as well as the Italian Super Cup in football, while in December, Anthony Joshua will fight Andy Ruiz Jr. in Riyadh for the boxing's heavyweight world title.

Lobbyists for Saudi Arabia in the United States have reportedly met with representatives of the NBA, MLB and MLS, while there are persistent rumours linking a Saudi consortium with a takeover of the Manchester United football team.

"This is just the latest high-profile sporting event to set up shop in Saudi Arabia and as such it's yet another opportunity for the Saudi authorities to try to 'sportwash' the country's heavily-tarnished image," Allen said of ASO's Saudi Tour.

The Saudi Tour is not the first example of alleged sportswashing in professional cycling. Amnesty used the expression to describe Israel's hosting of the start of the 2018 Giro d'Italia, while human rights groups expressed concern at the establishment of the Bahrain-Merida WorldTour team in 2016.

"Away from the prestige of events like pro cycling, the distinctly un-glitzy reality in Saudi Arabia is of a sweeping human rights crackdown, with women's rights activists, lawyers and members of the Shia minority community all being ruthlessly targeted," Allen said.

"There's been no justice over the gruesome murder of Jamal Khashoggi, and the Saudi-led military coalition in Yemen is still carrying out indiscriminate attacks on homes, hospitals and market-places."

Despite limited reforms in Saudi Arabia in recent years, including the lifting of the ban on women drivers, Amnesty International maintains that Saudi authorities have continued to escalate "the repression of all forms of dissent, including peaceful expression in support of human rights".

According to Reporters Sans Frontières, the number of journalists and citizen-journalists in detention in Saudi Arabia has tripled since the start of 2017, and the organisation states that repression of the media has intensified since Mohammad bin Salman was appointed as crown prince in June of that year.

It was illegal for women to ride bicycles in Saudi Arabia until 2013, while women were prohibited from attending football matches and other sporting events until 2018, and restrictions remain in place. ASO declined to respond when asked if women would be permitted to attend the 2020 Saudi Tour.

In ASO's press release to announce the inaugural Saudi Tour last week, CEO Yann Le Moenner claimed that the race was serving "riders' demands at the beginning of the year" and that it was a chance to "contribute to the development of cycling across the Kingdom", while the event also serves as part of Saudi Arabia's attempts to brand itself as a tourist destination.

It is not yet known which teams and riders will compete at the 2020 Saudi Tour, although it seems likely that the same teams will line up there and at the following Tour of Oman. Last year's Tour of Oman field included nine WorldTour teams.