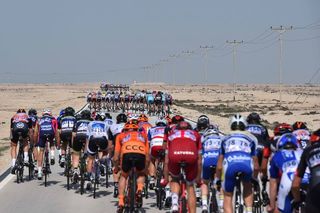 ASO previously organised the Tour of Qatar between 2002 and 2016, and also organises the Tour of Oman. (Image credit: TDW Sport)

Tour de France owner ASO has confirmed that it will organise a new category 2.1 stage race in Saudi Arabia in 2020. The five-day Saudi Tour will take place from February 4-8 and the route will be centred around the capital city of Riyadh.

The event precedes the Tour of Oman (February 11-16), ASO’s existing stage race on the Arabian Peninsula. ASO previously organised the Tour of Qatar between 2002 and 2016, and is not the only organiser looking to boost its revenue stream with races in the region:  Giro d’Italia organiser RCS Sport is behind the WorldTour-level UAE Tour, which in 2020 will be held from February 23-29.

“We are involved in the emergence of a new racing scene in the Middle East, which corresponds to the riders’ demand at the beginning of the year,” said ASO CEO Yann Le Moenner in a statement released on Tuesday.

“The creation of the Saudi Tour and its sustainable installation in the calendar is part of this movement. This new race both represents an exciting organisational challenge, a coherent sporting event for an entire category of riders and a nice opportunity for the television viewers who follow the race to discover new landscapes. This is also for us an occasion to contribute to the development of cycling across the Kingdom.”

Saudi Arabia sent no riders at any level to the 2019 World Championships in Yorkshire. It was illegal for women to cycle in the country until 2013, at which point women were allowed to cycle with limited freedom.

Saudi Cycling Federation Sabah Al-Kraidees described the inaugural Saudi Tour as “an honour,” noting that the event would serve to publicise Saudi Arabia as a tourist destination. Saudi Arabia recently began issuing tourist visas after travel to the country was largely limited to pilgrims, business travellers and resident workers.

“The Saudi Tour is a great opportunity to publicise the country's varied territories and historic sites and to let visitors discover our sense of hospitality,” Al-Kraidees said. “This initiative fits perfectly with the ambition of Saudi Arabia to promote the Kingdom beyond its borders while promoting sport and especially cycling.”

The route of the first Saudi Tour has yet to be revealed, though ASO said that the event feature stages in the hills around Riyadh suited to puncheurs, as well as urban circuits. In its statement on Tuesday, ASO suggested that, like the now defunct Tour of Qatar, the race will favour riders with designs on preparing for the Flemish Classics.

“On roads often exposed to the wind, the ability to cope with crosswinds will be an important asset for the teams that will look to dominate the race. On the Saudi Tour, the Flemish classic-style riders will be the ones to beat.”

The ASO statement also suggested that the Saudi Tour could move to other parts of the country in subsequent editions to provide different terrain.