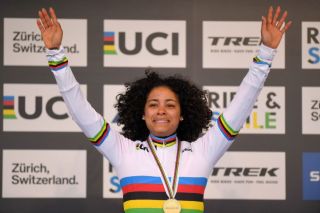 The Dutchwoman finished the season with €126,180 in prize money but far less in start money and wages than her male counterparts. She reacted with surprise at the total she earned with her 15 victories and seven podium placings.

"Well, that's a nice amount. I had no idea of it myself," Alvarado said.

"It is of course also the first year that I have won so much. For me, my prize money is higher than my wages and starting money. In total income we do not get close to the men, but it is great that we can go home with such an amount."

Her season-long rival Annemarie Worst was third overall in the prize rankings, behind Eli Iserbyt, with €97,280.

Philippa York: Women's cycling and the road towards equality

Iserbyt, who competed in 31 races with 10 victories and 13 podium stops, took home €108,380, more than €30,000 more than Belgian champion Laurens Sweeck and World Cup winner Toon Aerts. Men's world champion Mathieu van der Poel was a distant fifth, with €66,000 in prize money for his 24 wins and one podium placing.

The UCI, Superprestige and DVV Trofee series all raised the prize money for women ahead of the 2019-2020 season to bring equal prizes to the top finishers. The top four finishers in each World Cup earn equal prize money, while the top eight in the Superprestige and top 15 in the DVV Trofee take home equal amounts. However, overall men's prize purses exceed the women's in each series.