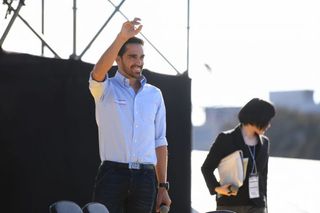 Alberto Contador has been hospitalised in Bogota with suspected food poisoning following his arrival in Colombia for the Giro de Rigo sportive, organised by Rigoberto Uran (EF Education First). The Spaniard was unable to ride the Giro de Rigo as planned, and he filmed an explanatory video from his hospital bed for the event’s Instagram account.

“I’m very sorry that I’m not able to participate in the Giro de Rigo,” Contador said. “I had trained with a lot of enthusiasm and but while I was travelling here, I started to feel ill, with a very high fever.”

Contador expressed hope that he would recover sufficiently the remainder of his visit to Colombia and pledged to return and ride the event in 2020. “I won’t miss it next year,” Contador said.

According to the Giro de Rigo organisation, Contador is expected to spend 48 hours in hospital in Bogota as he recovers from his illness. He reported a high fever and gastro-enteritis.

Uran will himself miss the second Giro de Rigo as he is still recovering from the heavy crash that forced him to abandon the Vuelta a España. Uran, who suffered a fractured shoulder blade and collarbone, as well as broken ribs and a punctured lung, will follow the leisure event in a specially adapted vehicle.

Tour de France winner Egan Bernal (Team Ineos), Esteban Chaves (Mitchelton-Scott), Ivan Basso and Luis Herrera are among the guests for the sportive, which takes place in the department of Quindío.