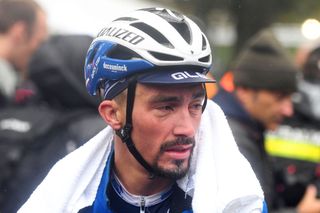 Julian Alaphilippe emerged from the AG2R La Mondiale bus the French team were using for the World Championships with large, puffy bags under his bloodshot eyes. Six and a half hours of riding through driving rain had clearly taken its toll.

"My eyes didn't look like this this morning, put it that way," he joked when a reporter, seemingly genuinely concerned, pointed them out.

Alaphilippe was worn out after a long, exhausting race and a long, exhausting season. The Frenchman was sensational in the spring, triumphing at Milan-San Remo, Strade Bianche, La Fleche Wallonne, as he racked up nine wins by the end of April.

He was extraordinary in the summer, surpassing all expectations to lead the Tour de France with two days to go and picking up two stage wins along the way.

In Autumn, at the Worlds, however, he fell flat.

"I've done difficult races before, but that's one I'll remember for a long time," Alaphilippe told reporters from the steps of the bus.

"It was a day of suffering, the likes of which I've rarely experienced since the start of my career. I'm still cold, even though I crossed the line a good while ago."

Alaphilippe finished in 28th place, 2:26 behind the winner, Mads Pedersen (Denmark) and having lost contact with the bulk of what was a 20-rider chase group behind the five-man Pedersen group.

France had shown themselves at the front of the peloton on the early and middle laps of the 14km Harrogate circuit, with Gallopin notably accelerating with Alaphilippe in the wheel with 36km to go. However, they were unable to react to the attack from Mathieu van der Poel (Netherlands) that triggered the decisive selection and faded from there on in.

"I have no regrets. I really gave everything I had. We followed the instructions given by Thomas [Voeckler] and we were beaten by stronger riders. It was a difficult day for everyone. That's how it is," Alaphilippe said.

The 27-year-old made no bones about the fact that the weather got the better of him.

"These aren't my preferred conditions. I expected to suffer today, and in the end, I cracked a la pédale, as they say. No excuses. That's how it is," he said.

"On the approach to the circuit I was already starting to feel more and more cold, and it wasn't going to get better, unfortunately. My teammates did a great job so that I could race as I needed to, getting me food and helping me change clothes. But when you're cold, you're cold and it's difficult to do anything about it. Again, these aren't the weather conditions I prefer. We couldn't have changed much. It was done a la pédale."

Alaphilippe has had such a stellar season, looking completely unstoppable at his best, that he must have had high expectations for Worlds. Managing a third 'peak' in form was always going to be a challenge but he addressed the fatigue he felt in Innsbruck 12 months ago by not doing any post-Tour criteriums and only doing six race days ahead of Worlds.

"I'm not at all sad, not at all disappointed. On the contrary, I'm actually very happy to have finished the race. It was some day," Alaphilippe said.

"I'm proud of the way the French team rode. We can be disappointed with the result because we expected more, but we did what we needed to do. I wasn't expecting miracles with these weather conditions."

Alaphilippe's season is far from over. He is expected to line up at Milano-Torino ahead of a crack at another Monument at Il Lombardia in two weeks.

Confirmation of his end-of-year plans will come next week. First, though, a final word before climbing back onto the bus in Harrogate: "I'm happy it's over."