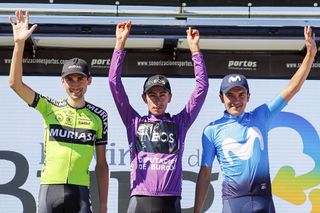 In a week’s time, all being well, a 151-strong peloton will gather at the foot of the eight-century-old cathedral in Burgos for the start of the most prestigious and most significant edition of the Spanish stage race.

The Vuelta a Burgos will be the first UCI ProSeries stage race to be held anywhere in the world since the COVID-19 pandemic struck. The five-day race is widely considered the first major test for international professional road racing as the sports reckons with the conditions created by the so-called ‘new normality’.

With no time trial, Burgos’ traditional summit finish on August 1 at the Lagunas de Neila is likely to decide the overall between still to be confirmed contenders such as Remco Evenepoel (Deceuninck-QuickStep), Richard Carapaz (Team Ineos) and Mikel Landa (Bahrain-McLaren).

While interest on which riders are most in form at the start of the new race calendar will be very high given the exceptional quality of the line-up, the main focus on Burgos will be elsewhere, as longstanding race director Marcos Moral explains to Cyclingnews.

“It’s a very complicated year. We had the technical side of the event organised since before the epidemic began. What’s keeping me awake at night since then is everything to do with race security, health and safety regulations and so on," Moral explains.

“The current circumstances make this Vuelta exceptional and special at all levels. It was going to be a ‘normal’ Vuelta that coincided with the Olympics, as it does every four years, and everything was planned. But then Mr. Covid-19 turned up and he ‘lined us all up against the wall’ [as the Spanish sometimes say when a crisis breaks – ed.] and we had to start all over again. We weren’t talking racing anymore, it was all about safety.”

The list of precautions to be taken by the Vuelta a Burgos are notable, and they include everything from restrictions on the movement of the media and general public, exceptional health precautions and protocols for the riders, teams and race officials, all the way down to barriers and other race infrastructure being regularly disinfected.

After multiple meetings between health authorities, government officials, security forces and race organisers, a 134-page document outlining all the measures to be followed has been published, while extra health teams of officials and helpers, including a special COVID-19 unit, have been brought in.

All riders, media and organisers will have to return a negative PCR COVID-19 test before they can attend the event. An unprecedented meeting with team doctors and race medical officials will also be held on the eve of the event.

So far, the huge amounts of preparatory work behind the scenes has gone well, with the race selected as an example of a ‘safe sporting event’ by the Spanish Sports Council.

“That's something we consider an honour,” says proudly Moral.

The final green light – definitive permission from the authorities for the race to go ahead – will logically only be given much closer to the time of the race start, depending on the ongoing health situation in Spain in general and in Burgos in particular.

“It’s got five doctors, two of whom have been working on the ‘front line’ of the COVID-19 pandemic in intensive care in the hospitals, as well as an epidemiologist who’s been in charge of producing government reports on the pandemic in Burgos. They know the subject very well in terms of protocols and so on, even if the pandemic is unpredictable and invisible and follows its own rules.”

In terms of the much-feared ‘second wave’ of the pandemic in Spain, as of July 21, after lockdown ended exactly a month ago.there were 201 registered ‘outbreaks’ in the country, with an ‘outbreak’ can be made up of as few as three linked cases. The country is seeing an increase in cases, at the rate of around 700 a day.

While easterly regions Catalonia and Aragon have been the worst affected in the post-lockdown period, Burgos itself has so far been one of the least affected areas in terms of registered cases, with three outbreaks in the last week, and a total of 19 cases in the last seven days.

In Spanish sport, the most dramatic COVID-10 related case to date occurred this week, when a second division football team, Fuenlabrada, registered more than half a dozen cases amongst its players. One of the league’s crucial final games had to be suspended as a result, meaning that another team, Deportivo La Coruña, was automatically relegated to the third tier.

Cycling, so far, has been relatively unscathed in terms of cases, and its first post-pandemic amateur race last week, the Vuelta a Zamora, passed off without incident.

However, as Moral says, the exceptional precautions and regulations remain more than necessary.

“We’re where the authorities say the cases should be – there were under 20 cases per 100,000 inhabitants in Burgos as of last week. That’s very low,” Moral points out.

“But we know that everybody, absolutely everybody, in the world of cycling is watching what we do and how our health protocols work out. We’re in direct contact with the UCI and we’re passing on all the information and data we can to their databases for their future reference. And we’re also working alongside the teams and the Vuelta a España organisers, who are helping us greatly.”

Despite those efforts, there is a chance – remote or otherwise – that the Vuelta a Burgos could still be suspended at the last minute due to the development of the pandemic.

Asked how he felt about that prospect, Moral say: “I have every hope the race will happen, that’s why we’re working on it. And if there was an outbreak and the health authorities consider that the race can’t go ahead, it would hurt us a lot.

For now, one week out, the Vuelta a Burgos is on.