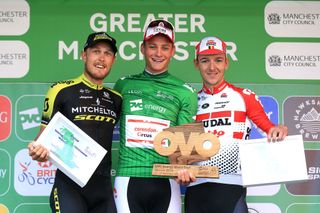 The 2020 Tour of Britain has been cancelled due to the COVID-19 pandemic. In a statement on Thursday, race organiser SweetSpot said that the uncertainty caused by the coronavirus pandemic made it "impractical" to continue planning to hold the event this year.

The race was due to take place from September 6-13, which meant that it would have clashed with the rescheduled Tour de France (August 29-September 20). The next edition of the Tour of Britain will be held in September 2021 and over the route planned for this year.

SweetSpot had previously announced the cancellation of the 2020 Women’s Tour, which was due to take place in June. Both races, plus the Tour Series which is also organised by SweetSpot, are looking for new title sponsors after OVO pulled out late last year.

Tour of Britain and Women's Tour will continue without OVO Energy

"The decision has been taken in light of the ongoing situation with the COVID-19 pandemic, which makes continuing with the planning and organisation of the 2020 race impractical," read the Tour of Britain statement on Thursday.

"Across the UK there are significant doubts around the potential to stage large-scale public events and gatherings such as the Tour of Britain as early as September and while any form of social distancing remains in place and there isn’t a vaccine available, people’s health and safety must come first.

"Local authority partners across Britain remain under considerable pressure with their priorities rightly elsewhere and so would not be able to contribute fully to the planning of the event, whilst also not being in a position to maximise the social, economic and community benefits that hosting a stage of the Tour of Britain brings to their area."

Although a number of sports organisations in the United Kingdom, including the Premier League, are understood to be exploring the idea of holding events behind closed doors, the Tour of Britain organisers said that they had not entertained the prospect of attempting to hold the race without spectators present.

"Holding the Tour of Britain behind closed doors or with extensive social distancing rules would not only be immensely impractical, but would rob our venues and spectators of these opportunities and go against everything that cycling, as a free-to-spectate and accessible event, stands for," read the statement.

The 2021 Tour of Britain has been provisionally scheduled for September 5-12, pending confirmation by the UCI. This year’s event was originally slated, as per tradition, to overlap with the Vuelta a España, but it faced a direct clash with the Tour de France when the UCI redrew the calendar due to the spate of postponements caused by the COVID-19 pandemic.

This 2021 Tour of Britain will start in Penzance and finish in Aberdeen. The route will be announced in full later in the year, with Devon, Warrington and Cumbria all slated to feature. Mathieu van der Poel was the overall winner in 2019.